Back to the pics! Lake Baikal, Russia 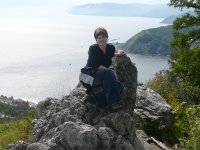 It's really quite a stupendously huge lake, you know. It contains 26% of the world's fresh water supplies, and could supply the entire world with fresh water for 40 years should we run out tomorrow. If I look a bit pained in this photo, it's because I had developed an enormous blister on my left heel, and for some reason was light-headed and puffed after walking up the hill. 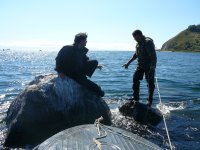 Greg on the 'Unfair Woman' rock (a charming mistranslation of 'Unfaithful Woman' rock by our rather buff Russian guide, Kostya). Naughty wives would be put out on this tiny rocky outcrop (located where the lake meets the Angara River), and if they survived overnight, they were allowed back home (if they died...oh well). The second man is Sergei, who kindly brought down his little tinny so we could brave the wind and waves and get out on the lake! 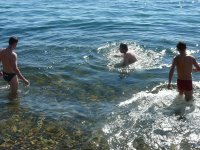 From left: Phil, Greg and Kostya actually swimming in Lake Baikal. Keep in mind the sun was shining and it was around 3pm - the temperature was still only about 8 to 10 degrees (I think you get the idea from the look on Greg's face!). Yes, dear readers, I chickened out. ;) 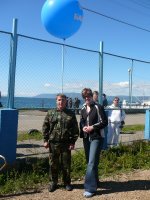 The Saturday we were in Lake Baikal was officially Lake Baikal's annual festival day. There was a stage, with singing and dancing and a lot of blokes in outrageously big military hats. I managed to get this security guard to pose with me. I love the fact he was standing there all seriousness - but holding a giant blue balloon. 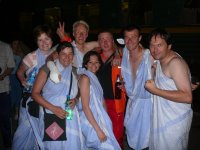 Toga! This is what happens when five bored Aussies and one Pom who's easily influenced get stuck on a train for far too long. The small dark-haired girl in the front is Jasmin, a Brissie girl travelling on a separate tour but who was more than happy to hang out with us. And the guy in the red vinyl tracksuit is Dmitri, a Russian solider on leave who was more than happy to feed us vodka.
Posted by Girl Clumsy at 5:20 AM