We're off to London tomorrow (Friday), and then onwards to Marrakesh on Saturday, so I don't have time for a big blog post I'm afraid.

We spent Monday to Thursday in Brussels, the capital of Belgium and also of the European Union. Lots of people in suits with briefcases wandering around talking on mobile phones, looking very important! Also, tons of beautiful Belgian chocolate, sugary sweet waffles, the Manaken-Pis fountain (they're obsessed with a pee-ing boy!) and.... 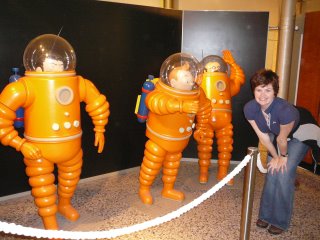 That's right. My childhood hero himself, along with Captain Haddock and Professor Cuthbert Calculus. This is me at the Belgium Comic Strip Centre - Belgium being home of Herge, Tintin's creator (as well as a hotbed of comic creativity - did you know, for instance, that the Smurfs were invented by a Belgian artist named Peyo?). The almost-lifesize models here are wearing the spacesuits they donned in "Explorers on the Moon" (Tintin, being of course, the first man on the Moon, back in the 50s!).

I've always loved Tintin and it was great to have a look at the artwork on show at the Centre. Comics really are under-rated as an art form. They're so detailed, and mean so much to those who read them! 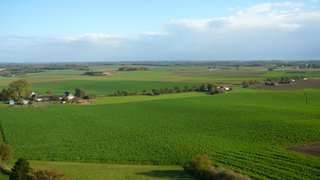 Cheesy Abba jokes aside, what a marvellously preserved battlefield. It's been kept virtually intact since that fateful day - 18 June 1815, when the Duke of Wellington lined up the Allied forces along a ridge, facing Napoleon's troops about a kilometre away. (The ridge you can see in the pic is where Boney lined up his artillery).

The weather in this shot is beautifully clear, but it was an odd day, with showers constantly moving across the fields. Waterloo, by the way, is the nearest town to this area of farmland; it's where Wellington sent his dispatch after the Allies (British, Dutch-Belgians & fearsome Prussians) managed the victory. 9500 men died; 12 000 horses & 30 000 men were wounded. Boney fled, only to surrender himself to the British fleet a few days later. He died in 1821 in exile on St Helena. The Duke of Wellington lived on until 1852 - he was even present at the opening of London's famous Great Exhibition in 1851!

Well, that's enough bollocking on I guess - time for some precious sleep.