Workers! United! Will Never Be Defeated!

Prepare yourself for another Clumsy Tale of misadventure!

I actually had a one-on-one interview with Kevin Rudd this morning, as part of the Labour Day march through Brisbane. That's right - me and Kev, arm-in-arm, fighting The Man.

Well, maybe not. Anna Bligh, Sharan Burrow, Grace Grace, Wayne Swan, Paul Lucas, Clem Jones (in a van) and several tens of thousands of others were along for the stroll. On a fairly muggy day too, I might add. 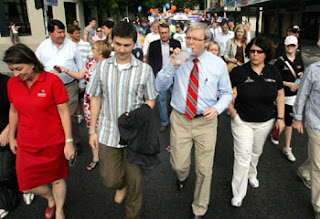 The march kicked off halfway down Wharf Street just after 10am, with Kev & Co. up front, following the band as they turned onto Turbot Street and headed off through the Valley towards the final destination - the RNA Showgrounds.

After watching several TV journos shove microphones and cameras in Kev's ruddy face, I did a test run by grabbing Anna Bligh for a quick chat about tomorrow night's federal budget: "What do you want for Queensland? Do you think Peter Costello will throw money at us, given we're a crucial federal election battleground?" etc etc. That went well, so around the turn into Brunswick Street I spotted a camera-free Rudd and switched my mic on to record.

"Just wondering if I could ask you about..." and so on.

Got a few questions in, and didn't sound too much like a complete nonce, which was really the object of the exercise. Kev mostly wheeled out "responses prepared earlier", so I was never going to get a big bombshell statement, but he was still very pleasant. After saying thank you and moving to one side, I got stopped myself by one of his media people, who was friendly enough, but seemed to be a bit nervous that she was unable to monitor every word Kev was uttering. Fair enough too, I suppose. Everything out of the big federal pollies' mouths these days is recorded; they can't burp without it being included in a transcript.

I lost track of Kev & Co. on the way into the RNA Showgrounds - I was busy doing a cross and trying to find some chanting for background effect. It seems the chanting was less enthusiastic this year; more sporadic. It was at this point a friend of mine named Steve popped out of the Rail, Tram & Bus Union group, and came over to see what I was up too. I may have misheard him due to the Highland bagpipers who passed by at that very moment, but I could have sworn he said they were here mostly for the free alcohol.

I headed into the showgrounds and parked my behind in one of the covered grandstands for a while, which unfortunately meant I was on the other side of the stadium to where Rudd got up to have a yak around 11:30am. Cue your humble Girl Clumsy running to the nearest speaker and standing on a concrete barrier in an effort to get the mic closer to the sound. Dangerous territory indeed. I couldn't help but notice that the bloke standing in front of the barrier, slightly below my elevated position, was indigenous activist Sam Watson (he has a very recognisible hat). I figured I'd better not fall, or I risked causing An Incident. There's just too much irony in a pasty white chick squashing a black man for me NOT to be completely embarrassed.

My computer predictably cacked itself as I was trying to file a story for midday, so after some re-jigging and a file by phone, I headed back out to the stage area to see if I could find ACTU President Sharan Burrow, whose speech I missed. I was lucky on that count for two reasons: one, I found her; and two, I found her quite suddenly, yet managed to avoid physically knocking into her. After that I headed into the maze of white tents to find the Media, Entertainment and Arts Alliance stall. I promptly relieved them of a sausage-in-a-bun and a Diet Coke, which was very welcome after spending an hour surrounded by the whiff of frying onions.

After a brief reunion with the aforementioned Steve (opened can of XXXX in one hand, yet-to-be-opened can of XXXX in the other), as well as a catch-up with a more long-lost friend (known to the ages simply as "Doof") - I headed back into the grandstand for a cross with programs. That short and sweet task done, I decided to head back along Wickham Terrace to the flat, so I could pick up my car and head out to the studio.

And so I find myself reminiscing over my day of action. Keep in mind - my overly large backside may have intruded into camera shots at several points along the marching route, so keep an eye on the TV news tonight. There's a chocolate bar in it for anyone who spots me!
Posted by Girl Clumsy at 2:41 PM