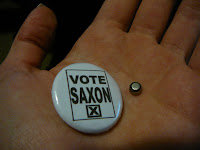 On the left, you can see a "Vote Saxon" badge, which is a geeky Doctor Who reference. I've been wearing my badge all week - since we got keen during the improv fest and made a bunch. If you've been watching Doctor Who, you'll get the Prime Ministerial reference. For those of you not really caring about nerdy sci-fi, you can instead pay attention to the object on the right.

Our Once and Future Prime Minister has been in Brisbane for the past few days electioneering - ahem, I mean, releasing policy statements and conducting public and political consultation. On Friday he came into the 4BC/4BH studios to do interviews. Boy, there were a lot of people in suits just hanging around corridors that day. Anyway, as I walked past the 4BH studio to the newsroom (joking to myself that "Look! Mr Sheen's in the studio!"), a tech followed me in. And presented me with the above item.

Apparently Mr Howard had needed to replace his hearing aid battery, and had lost the old one on the floor while fiddling with the mechanism. Steve the tech said he had joked about the irony of the batteries being so small, especially because as you get older and lose your hearing, you also start losing your sight. Somehow Steve ended up with the discarded battery, and now it's in my possession.

Exactly what one does with a battery that once performed important work for the nation by nestling comfortably in our leader's left ear I'm yet to discover. Ebay was suggested, but rejected for fear of a) getting in trouble with work, and b) getting in trouble with the federal police. It's also possible nobody would believe it is what I claim it to be. It's even more possible - nay, likely - that nobody would actually see any value in such an item.

Anyhoo, onto the next story. This morning I was awoken by the newsroom, and asked to go to a Prime Ministerial Media Conference at the Ballymore rugby ground. I agreed, as there's plenty of things one could ask the PM about at the moment (the indigenous abuse action plan, and as I would find out listening in the car, new terror threats in London), and found myself parking at the park at 8:40am. There didn't appear to be much happening, save a few beefy-looking rugby types indulging in some training. Physical exercise? Before noon? Honestly, I'll never understand athletes.

All of a sudden, a mass of suits poured out of a nearby admin building, and onto the field. There was the PM, right in the midst of it, bright and sparkly and shaking hands with the rugby boys. They turned to go back into the admin building, where I figured some announcement was coming. I raced back to my car to grab the camera for a quick shot. Unfortunately I only got backs: 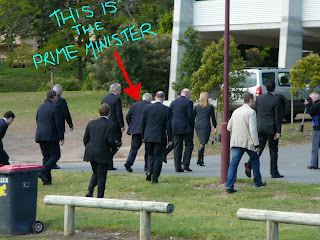 As it turned out, the "media conference" was just the announcement of $25 million to build a national rugby academy at Ballymore. It was just an excuse for rounds of self-congratulatory backslaps amongst the private school boys' club that makes up rugby union's officiating elite. Bad gags abounded too. The PM at one point talked about the funding, and said, "I guess all I can say is my name is John Howard and I'm here to help!" - a play on Kevin Rudd's now famous address to the ALP conference earlier this year. It was all I could do not to groan (you may pick up I went to a rugby-playing private school).

I could have redeemed the morning by asking the PM some questions about other issues. But his hawk-like media girl, another extraordinarily snappily-dressed member of the Canberra press sec corps, told me he wasn't going to discuss anything else, and there might be a conference after the NT taskforce meeting later that day.

Bugger. I didn't blog about this earlier in the week, but I had gone to a Howard presser at Burpengary on Thursday, and had tried to ask a question just as he said "Thank you" and finished the conference. Regular readers to the Clumsy Chronicles will remember my earlier encounter with the PM at a lunch, where - despite screwing my courage to the sticking place - I had failed to ask him a question. So today marked THREE times that I have been unable to ask Mr Howard anything.

I did, however, follow him for a while after he left Ballymore. His special car was waiting outside: 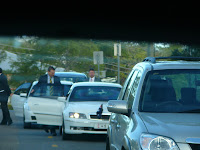 You can see, if you squint, the "C-1" number plates, and the Australian flag on the bonnet. Tops. This was taken through the back window of my Corolla, as I idled 50 metres down the road.

As the procession took off, I followed, mostly because I was heading in the same direction, but also because I fancied myself a bit James Bond-y, and wondered if I followed them long enough would I get pulled over and questioned as to why I was stalking the Prime Minister.

They turned into Gregory Terrace, and followed it around to School Road, then onto Boundary Street, eventually making the turn right into Little Edward Street, and presumably heading into the city. What's weird is that my street bisects Gregory Terrace and Boundary Street. So the Prime Minister could have got to the city quicker had he TAKEN A SHORT CUT THROUGH MY STREET. We could have been within spitting distance.

Now that, my friends, is a genuine coinky-dink.