But is is art?

Here's a picture of a bunch of happy improvisers, backstage before last night's Extreme Impro show at the Brisbane Arts Theatre: 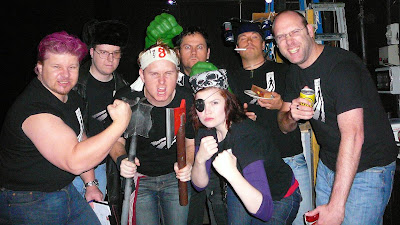 Now imagine these same happy improvisers... taking their clothes off.

We'd been forewarned by the MC Tom that he was keen on pushing performers to the edge. Thankfully, he included in this warning his plan to play a game called "Strip Questions", which would entail players removing items of clothing if they failed to ask a question every time they spoke. It allowed us to raid the theatre's wardrobe for some special costume pieces, still in storage after a BAT production of The Full Monty a few years back.

The game was never going to be clean, but Tom's decision to set it in a church really made me wonder if I have in fact strayed too far into Beelzebub's territory. Oh well, it's just my immortal soul. Tristan was the first to remove something - his shoes and socks, very demure. It didn't stay that way, as Greg shortly afterwards grabbed at the top of his trousers, and with a thundering tear of velcro and stud hooks, ripped away the stripper pants to reveal a pair of red boxer shorts with "STUD" written across the crotch. As the navy material soared over the first three rows before landing in the aisle, I entered stage right, in character (barely) as a policeman.

It wasn't long before my inability to think clearly resulted in a statement. Seven milliseconds I believe was the official time. I should've gone with the shoes, considering they were just ballet flats. But instead I ripped off my official Impro Mafia t-shirt, revealing a purple shirt underneath. I blundered again, shrugged and ripped off the purple shirt, revealing a red camisole with glittery appliqué over the décolletage.

I fluffed another line. Time for the pants. I ripped at my waistline and the pants came asunder, revealing my own pair of "STUD" boxers. I think there were cheers from the crowd but I couldn't be certain, as the stud hooks on my right leg had refused to budge. I stood awhile tearing at the material to free it, while other players entered and began stripping, and Greg and Tristan lost even more. My big surprise came when Tristan tore off his shirt and turned to face me, with twin nipple piercings glinting under the stage lights.

This was it. I was in a red cami and boxer shorts. I had pre-planned my underwear - a pink bra and pink-and-white small shorts. I struggled to say anything - for my life I couldn't think of a question to ask, but I daren't open my mouth for fear of being forced to remove more clothes. I was stunned, like a bunny in headlights. I had two thoughts running in my head:

Eventually, after Wade's entrance "I'm the pope!" (rip) and Liam's line of "I'm St Peter!" (rip), the whole stage was trashed. Clothes everywhere, the audience laughing, screaming, crying in terror - who knows. I just thought - it has to end now, before the goodwill disappears, and before I have to take off any more clothes.

So I jumped to the front of the stage and said 'Hang on - am I dreaming?" and brought the scene down.

We then took a few moments to scramble around for our garments, before beating a hasty retreat to side of stage to redress.

Impro is all about taking risks, and for many people, the idea of getting onstage at all is too terrifying for words. As a natural and shameless attention-seeker, it suits me to a tee. I've always loved performing - but I've always had body issues. Well, I am a western woman.

I'm not sure if removing a fair amount of clothing on stage has done anything for those body issues - I don't think it's likely I'll be auditioning for Steaming* anytime soon. But it was certainly - like that time I jelly-wrestled - an experience.

And experiences are good things to have, even if it does mean signing over your soul to the Devil and all his little minions.