If I had been blessed with so flexible a brain and wild an imagination as the immortal Bard himself, I might write you a pretty speech about my encounter with Hamlet at the Courtyard Theatre in Stratford-upon-Avon this evening. Alas, I was not so fortunately gifted. Therefore I entreat you, gentle readers, to simply picture your intrepid Antipodean correspondent with a large smile gracing her round, shiny visage, as she sat in the gallery not 20 metres from David Tennant, Patrick Stewart and the other fine actors from the Royal Shakespeare Company, as they strutted and fretted their hour (actually three and a half) 'pon the mirrored thrust stage, full of sound and fury (and more than a little cheeky madness on the part of one D. Tennant).

The only disappointment (if it could be called that), was my inability to secure the signatures of the players due to the post-show crush at the stage door. I present the following as evidence: 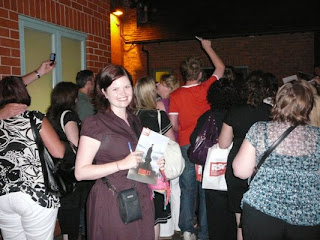 I was, however, able to raise my Panasonic Lumix into the sky, and capture fleeting glimpses of our noble thespians fulfilling the dearest wishes of the madding crowd by putting black marker pen to their programs: 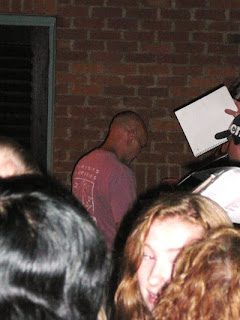 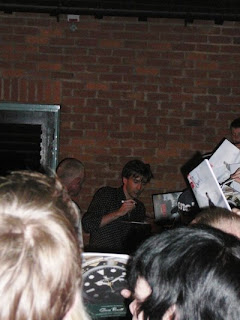 If your ears yearn to hear more about the production, tune in to Spencer Howson on 612 ABC Brisbane between 7 and 8am on Wednesday 30 July, to hear The Wah chat about Hamlet. I hope to write a longer, more succinct review at a later stage. For now I will simply bask in my own sense of self-satisfaction!
Posted by Girl Clumsy at 11:30 PM