She Wore a Tutu

Further to my post yesterday, I headed back into court for "That Guy's Bail Hearing - Part Deux".

I hurried in about two minutes after it started, plonked down next to one of the TV journos, and looked up towards the benches. 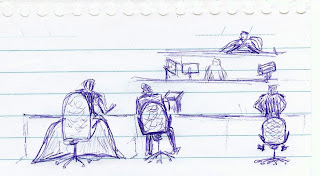 There she was, perched in her chair at the defense end of the table, her black heels poking out from under six or seven layers of cascading ivory-white netting.

She was Peach Storm no longer. She was now - The White Tutu Tornado.

I turned, wide-eyed, to Jess next to me. She rolled her eyes, knowing immediately the source of my surprise. "It's even better when she stands up," she whispered.

And she was right. White Tutu Tornado had teamed the tulle with a black shirt that had transparent, mesh-like sleeves, and topped off the ensemble with several strings of pearls. When standing, the skirt puffed out from her hips, and when walking, it bounced and swayed. When she faced the magistrate, you could get a clear view of the cream ribbon that encircled the top of the skirt around her waist, coming to rest in a pretty bow at the back. 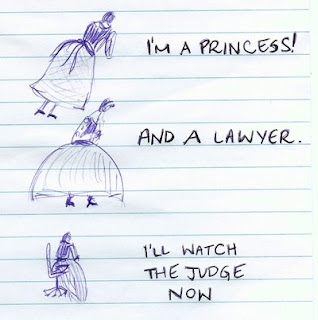 It was the kind of get-up I'd expect to see at a modern dance performance, or at one of Pamela Anderson's frequent weddings. Granted, it was Halloween, but I don't think any of us in the Magistrates Court could work out if she was trick- or treat-ing.

Anyway, the hearing took an hour and a half. Bail was refused, but not before I'd made some shabby attempts at drawing White Tutu Tornado herself.

Strange. Oh so strange.
Posted by Girl Clumsy at 11:53 PM