Felafel is now three weeks away from opening. The play is shaping up beautifully - the actors are in scripts-down mode, characters are being fine-tuned and several of the big dance numbers choreographed and cemented in memory.

Dance numbers, I hear you ask? Oh yes, my friend. I wish I could tell you more. But I don't want to spoil it!

We had a cast change a couple of weeks back; but it's all for the best. A good friend of mine Damien has come in to play the MP, Fat Cop & Flinthart (blink or you'll miss 'im), and he's scarily appropriate. The cast as a whole continue to inspire and delight me - they are officially GAME FOR ANYTHING. It's just brilliant. We all still laugh ourselves silly when a piece of blocking is inserted, a new gesture added, or a facial expression changed to hit a joke just that little bit harder. 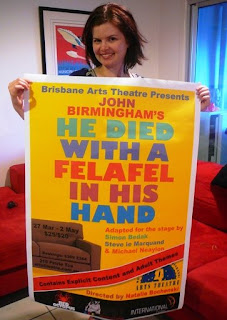 Our big bright yellow poster has gone up outside the theatre, and our super glossy A3 versions will be distributed next week. Today I sent out the media release, and we're already locked for a photoshoot with mX, the daily free paper for commuters. Hopefully more will follow. I'm investigating some discounted advertising with 4ZZZ - they are given a fairly big mention in the play after all!

I had a lovely surprise today when I got home from work: an Express Post package direct from the Wagga Wagga ranch of Squire Bedak himself. Simon has been just fantastic with script updating and performance & promotion advice throughout this big adventure - but I wasn't expecting the following: 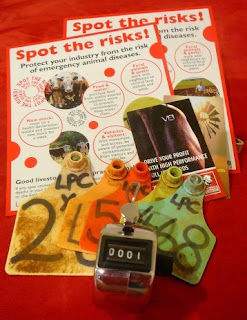 That's several fridge magnets espousing the benefits of the Hereford breed and disease prevention strategies; various cattle tags (which look like they've come straight off the beasts themselves), and a "stock counter".

The reason for the cattle counter was contained within the Squire's accompanying note: "There ain't much diff between beef-on-the-hoof and Australian theatre audiences, except the latter aren't as well behaved."

Zing to Squire Bedak. I've put a Number 1 on the stock counter just for him, as we're expecting an appearance on opening night - if only to collect his contractually obligated slab of ice-cold Coopers Pale Ale.

His note also contained a charming little drawing, which I couldn't help but photograph for inclusion here: 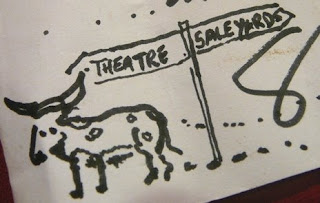 I'm going to have it put in a tiny little frame, I think. Thanks to Simon for my surprise present - it's left a fresh-off-the-land smell in my kitchen too.
Posted by Girl Clumsy at 11:06 PM