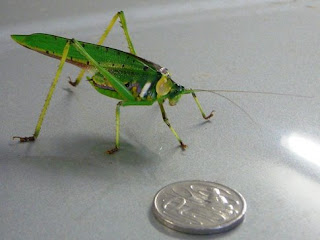 Grippy is a colossal, brilliantly green cricket that I discovered on the roof of my Corolla as I left work at midday today. He was just perched there, all six legs firmly planted on the silver paintwork. Now I've got a bit of a thing about insect-y type creatures flying in my face and biting my eyeballs. So I carefully opened the driver's side door, jumped in and slammed it shut behind me.

"He'll jump off as the car starts moving," I said to myself. I cranked up the motor, whacked on NewsRadio, departed Cannon Hill, and pointed the Corolla in the direction of Highgate Hill.

I parked near my destination - screenprinting & design business Red Octopus. I clambered out and slammed the door - and came face to face with Grippy. "What the f***?" I exclaimed. "How are you still on the car?" Sure, it's 60km/h most of the way, but still.

"Maybe he'll jump off into the nearby shrubbery now," I said, grabbing my Felafel posters and hurrying away. I was wrong. Fifteen minutes later I returned, and there was Grippy, still chillaxing on the roof.

"Right," I said, getting into the car and taking off towards Destination Two, Avid Reader. I parked, stepped out - and there was Grippy.

"For f***'s sake, you stupid bug," I said. And yet, I didn't have the heart (or the courage really) to flick him off. So I took off to the bookstore, returned ten minutes later - and there was Grippy. Just being green. And cool. His fine long antennae twitching slowly in the wind.

"Fine," I told him. "Suit yourself." I got into the car again, and finally headed home. A repairman was blocking the entrance to the garage, and in the commotion I forgot about Grippy. I got out of the car and wandered upstairs. The Wah announced he was going to the shops. I had a flash of memory. "Look and see if the cricket is still on the roof! He's been there for over an hour at least!"

Moments later, I got a phone call from the garage. "He's obviously not finished whatever business he's on," said The Wah. "He's still on top of the car. And he's massive!"

I grabbed the camera. I wasn't letting Grippy go again without a photo. This one's got the flash on - check out his eyes! "What can I say? I'm clingy."
As the Wah removed the twenty cent piece he'd laid down to get a sense of scale, Grippy finally flittered off the top of the car, and latched on to the garage gate.

It's over three hours since I took the photos - and he's still there.

I salute you, Grippy. You truly are the Superman of Gryllidae.
Posted by Girl Clumsy at 4:56 PM