Fresh off the wires this morning - apparently Jennifer "America's Sweetheart" Aniston and John "My Body is a Wonderland" Mayer have ended their relationship. For a second time.

You can practically hear Mary Hart's voice screeching in your head, can't you? Either that, or there's just a long dull flat resounding noise - the sound of where your hope that humanity had a depth of interest in public affairs beyond tabloid guttersniping used to be. You get used to that droning after a while.

But I thought I'd use this opportunity to begin what I'm hoping might become a semi-regular feature of Girl Clumsy Dot Com - World of Douchebags. Cracked.com used to do something similar, but it's defunct now, and frankly ripe for the plagiarising. 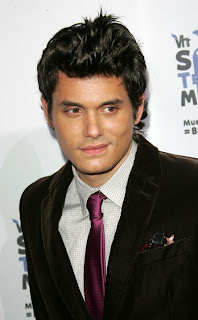 I mean, look at him. He oozes Eau de Douchebag through his slimy, fake-tanned pores. Look at that smug grin. Look at that greasy, wannabe Pierce Brosnan hair. And as for the faux-velvet suit and "Look, I'm an individual" rose-wine tie... oh, somebody get me a shower. I feel dirty.

But apparently, chicks dig John Mayer. He's sensitive or some other rot. When will girls learn that just because a dude has tattoos and can pluck out some sappy tunes on an acoustic guitar, doesn't mean he needs you to help him get over his hurt and his pain?

Oh no. John Mayer looks exactly like the kind of guy who'd smooth-talk you at a shopping centre when you're having a particularly bad hair day, then weasel his way into your house, subject you to some slimy groping up against the fridge, then steal your ATM card to buy flowers for his Mum. Everyone else will think he's lovely, but you know the lonely, frizzy, chilly-arsed truth.

You may look somewhat horsey, Jennifer Aniston, but you can do better than John Mayer.

Do I have any seconds for the notion: John Mayer = Douchebag?
Posted by Girl Clumsy at 9:59 AM

Email ThisBlogThis!Share to TwitterShare to FacebookShare to Pinterest
Clumsy Categories: comedy gold, the rich and famous
Stumbling about in: Briz Vegas