Having snaffled some free tickets from work, I took The Wah for a surprise Sunday morning visit to the Brisbane Cheese Tastes event at Royal on the Park this morning. After stuffing ourselves on grilled haloumi & melted raclette on bread, we discovered the interior displays, and really got down to sampling. After picking up some fresh goat's cheese and a vintage cheddar from the always-tasty Maleny Cheese, we went off for a walk through the City Botanic Gardens.

We ended up at Old Government House, which has recently opened to the public after an extensive restoration for Queensland's 150th anniversary of statehood.

It's quite lovely, and I'd recommend everyone get along for a visit. It's free, and you can wander about the big empty rooms as much as you like. You can even have high tea in their new cafe, and feast on one of these babies: 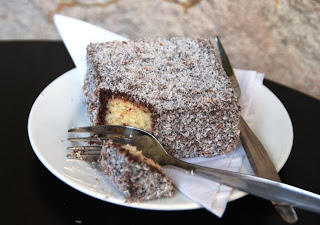 For the non-Australians-and-New-Zealanders, the lamington is a quintessential antipodean dessert. It was the French chef at Queensland's Old Government House who officially invented the lamington. Forced to improvise when extra guests turned up for an afternoon tea, he dipped sponge cake squares in chocolates, then rolled them in dessocated coconut. Being a Frenchman, I imagine he said voilà! then got back to eating frogs' legs and playing the piano accordion (that friendly bit of Francophobia is included purely for my friend Aurelie). The name lamington comes from Lord Lamington, who was Governor at the time.

We then hit the Botanic Gardens again. See if you can spot me in here: 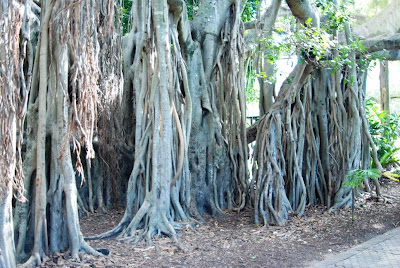 And I'm quite happy with a series of photographs I took of this bird, as he warmed his wings in a little patch of winter sunshine: 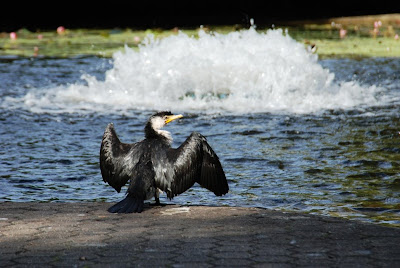