All the way to Hue

You know, there's a lot to be said about being completely unprepared for your holiday.

If you plan stuff, then you have expectations. Due to all of the work and various theatre commitments I've had this year, I put very little thought into this trip - what I wanted to see and do. I had very few expectations.

And you know what? It's FANTASTIC.

Everything has been an absolute joy. Every day is full of surprises and unanticipated delights. Even the jellyfish sting worked out OK; I have a big angry red welt on my left forearm, but damnit if I don't look hard-core for it. Here's a shot of The Wah and I at the cave entrance, overlooking the bay, near the site of the now-infamous stinging. 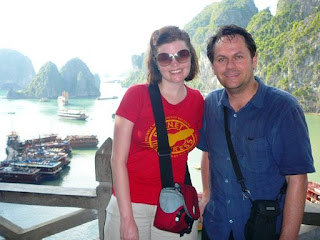 Mmmm, we're sweaty.
And who would have thought I would have enjoyed crossing the road? Such a simple activity, but here it's like being thrust into your own fully-immersive video game, like a cross between Tetris and Frogger. You just step out and go for it. There's fewer cars, but loads of motorbikes and scooters. Sure, traffic is slower, but there's more cohesion - despite the constant stream of tooting on horns. Traffic is one big organic mass; you move for someone, they move for you. Road rules are fine, but optional. Helmets are compulsory, which is good.

I wore one today, as we took a motorbike ride around Hue, visiting various places of interest. Back home I'd be wary of riding a bike; here I didn't even think twice, and I didn't feel unsafe for even a second. 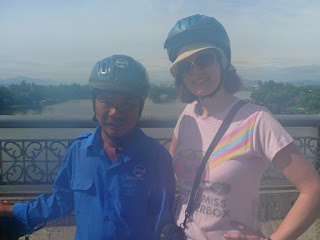 That's Teo, my biking buddy. We're in the haze.
And I'm in a ridiculous hat/helmet combo.
We motored around back streets and jungle-y areas, through rice paddies and villages. We stopped to see how incense and conical hats were made; we saw the Colosseum a 19th-century King had built (when Hue was the capital) to see elephants fighting tigers. We stopped at a Buddhist monastery for a massive vegetarian lunch - where I was force-fed by a Lady Monk. She literally shovelled the food in my mouth. 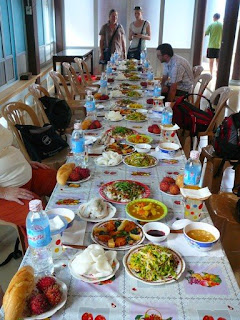 Food, glorious, non-meaty food
We finished off today with a look at the Heavenly Lady Pagoda - which was the home of the monk who set himself on fire in Ho Chi Minh City as a protest in 1963. You know, the one from the Rage Against the Machine album cover. The blue car he travelled in that you can see in the photo is preserved there.

We finished with a boat trip along the Perfumed River, before a final bike trip back to the hotel and a refreshing swim. Oh the heat is wonderful and terrible, as it generally is.

Tonight I will feast again; for the food here is delicious, full of flavour, and extremely affordable. Our first night, I had duck in a tangerine sauce. TANGERINE. I hope to have it in pineapple sauce next...
Posted by Girl Clumsy at 9:50 PM