Brisbane Festival: The Boy With The Tape on His Face 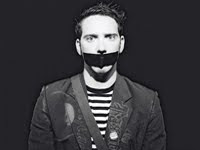 The Boy With The Tape on His Face probably takes the award for the most intriguing show title of the Brisbane Festival. But the performance itself is far, far more interesting than its name - and provides the most whimsical hour of contemporary clowning, mime, puppetry and play that you're likely to have this year.

"The Boy" - otherwise known as Sam Wills -  is a New Zealander, but there are no jokes here to be had about his accent. That's because Sam does indeed have a rectangle of black gaffa tape stuck across his mouth, and doesn't speak a word throughout the entire show. Luckily his eyes are fitted with a retinal version of Babelfish: large and expressive, they convey everything you need to know - including when The Boy wants you to come up onstage with him.

Accompanied by the same wistful accordion sounds that followed Amelie on her Parisian adventures, The Boy performs impressions, physical comedy and tricks, using props scattered about the stage. Mundane items become magical; the ordinary becomes extraordinary; and the ridiculous becomes sublime. The show is interactive; but its sweet nature is hypnotising, and no one objects to being made to jump through a paper hoop; or learn an impromptu dance routine. The smiles that spread over your face as you realise what The Boy is doing make you realise the inner child you thought had disappeared a long time ago may still be lurking around somewhere. Maybe you just needed to be quiet to hear it.

The Boy With the Tape on His Face is full of genuine heart. See it, and be entranced.
Posted by Girl Clumsy at 10:30 PM