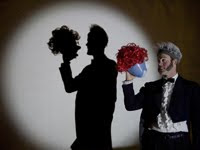 Shadow puppetry is always engaging to watch, but it turns out looking at how the projections are made is equally as fascinating. Stick Stones Broken Bones is a Canadian one-man show that captivates you with the reality of puppetry, before charming you with the fantasy. It's a delight for all ages, and another stand-out of The Carnival's Edge program.

The puppet master enters the stage in a low-key way, but soon bewitches the audience with his childlike vocal mannerisms. He speaks in sounds and emotions, not words - when he speaks at all. Onstage is a clothesline draped with bits of clothing and other props. Over the course of 45 minutes, these are removed and fashioned into objects that look bizarre and unwieldy - until the projector's flicked on and the shadows jump into the light.

A doctor carries out a brain transplant, monkeys fight a UFO, and a jockey battles to get his steed through a horserace. In perhaps the show's most demanding sequence, the puppet master uses all four limbs to convey the image of an elderly couple playing chess. It's a mesmerising display of physical theatre that is genuinely heart-warming.

Children in particular will be delighted by this show, but I daresay grown-ups will find grins spreading across their faces too. Stick Stones Broken Bones plays every day at 5:45pm. All tickets $16.
Posted by Girl Clumsy at 10:35 PM