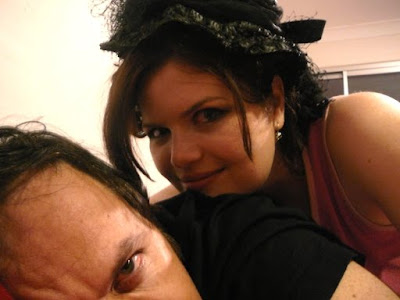 The Wah has been working for Jack Sim's Ghost Tours for almost three years now. He works primarily at Toowong Cemetery, and is, as you might imagine, perfectly suited to telling stories of horrible history and malevolent murder.

This year, Jack approached me about putting together a new tour for Nundah Historic Cemetery, on Brisbane's northside. He and his researcher Carolyn gave me all the details, and I wrote the script for the tour. I hired a costume that made me look like a macabre Mary Poppins, and on Saturday night I performed the tour - three times!

There have not been tours at Nundah Cemetery before, so this one was organised as a special Halloween one-off night - with the hope of maybe doing more in the future, if those who attended it enjoyed it. They seemed to - all three groups listened to the stories with interest, and asked questions. Some even had relatives buried in the cemetery, and proudly pointed out their plots. Many gave great feedback to Debbie from Ghost Tours, who did all the organising (and carried around lanterns, torches and insect repellant all night!).

Nundah Historic Cemetery is a beautiful small graveyard - well, as beautiful as these places can get. I certainly hope I can host more tours there in the future. Next time though I might invest in some flat-soled boots - my boots are reasonably sensible, but by the third tour had crippled my toes!
Posted by Girl Clumsy at 11:58 PM