Last night's episode of Prognosis: Death! Pandemic was pretty gosh darn awesome. The staff of St Love Hospital were sent on a group-bonding summer camp retreat at the St Love Bayou, only to be confronted by a vicious yeti.

I'm pleased that the show was so awesome, because I would hate to have caused myself physical harm for something that wasn't totally worth it.

What physical harm, you say? Why, that would be this badly swollen foot: 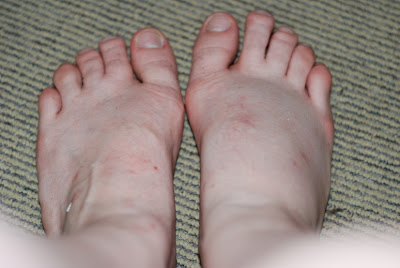 It's the one on the right.

Of course it happened in the second scene of the night. Nurse Lottie Buble's trait for the evening (a suggestion I get from the audience) was "rage-induced narcolepsy". Basically she'd get so worked up about something, some sort of self-preservation mechanism would kick in and she'd faint dead away.

So I start the scene with the rage element - bashing at the hospital bed with Buble's regulation-issue nurses clipboard. I then peel back and take aim at the mattress-y part of the bed. Of course, being Girl Effing Clumsy, I completely f*** up the shot, and crack the top of my foot into a very hard piece of wood.

The moment happened to be caught on camera by Wanda Anderson, one of our amazing audience photographers: 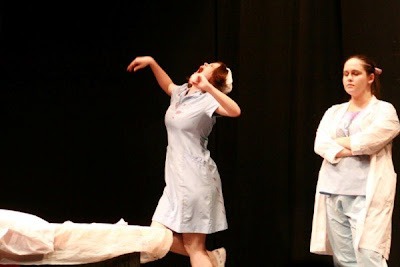 The pain is real. Feel it. Feel it!

I had intended to kick the bed and parlay that into a humourous bit of slapstick physical comedy with a faint, but after the intense shock of the kick, all I could manage was a sharp intake of breath, a silent scream and then the line "I missed".

It didn't get a laugh. Not surprisingly, as it wasn't funny. CURSE YOU BRAIN FOR NOT BRINGING THE FUNNIES WHEN THE BODY IS IN PAIN.

Turns out a lot of people thought I was acting because I recovered reasonably quickly and moved along with the action. I'm going to take that credit. I WAS putting on some brilliant acting. Method acting, sure, but damnit, you take what you can get.

By interval my foot had swollen up like Marlon Brando after a bee sting. The energy and focus on the performance got me through the second half, but once I removed Nurse Buble's shoes after the show finished, I became almost an instant cripple.

But you know what? It was a great show, with fantastic scenes, good laughs and mighty amounts of blood. If despite physical pain I can still look as pleased as this... 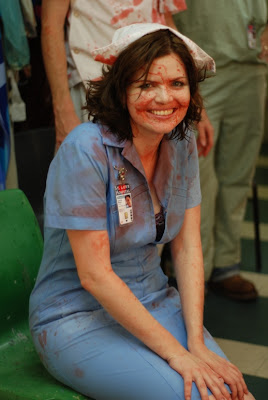 (Not that I want it to happen again, mind. I'm all good for injuries at the moment. Really.)

There are only two nights of the show left - and a note for the Burgers/Felafel fans out there - bon vivant and playwright Simon Bedak will be in town and coming to the show this Saturday 30 January, and is very excited about meeting people. Book your tickets now!
Posted by Girl Clumsy at 1:25 AM