Prognosis: Death! and the people who love it

Ah, me. The revival season of Felafel is over, after a blitzingly good season. We sold out three shows, with two more close to it. I am so proud of how well the show has performed, and my cast for being simply wonderful. I'm now bunking down with playwright Simon Bedak as he refines the script for The Tasmanian Babes Fiasco, the Felafel sequel that will premiere at the Brisbane Arts Theatre in April. My beloved Wah has kicked into directing mode for Joseph Heller's Catch-22, which precedes Babes in March.

But before that, our brains have to do another flipswitch back into impro mode, for Prognosis: Death! Pandemic. This spontaneous schlock-medical-sci-fi comedy was ImproMafia's Great Leap Forward in 2009. We had begun work on extended improvisation formats in 2008, but in this show everything came together in one earth-shatteringly triumphant explosion of fake blood, great characters and mile-a-minute laughs. 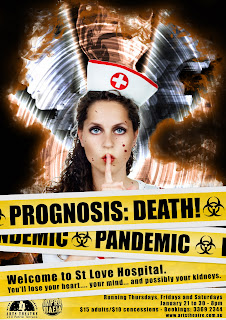 What's amazing about this show is the amount of love and loyalty it's inspired in not only the cast, but from regular audience members. Our most important contributors are of course the people who pay us money to watch our onstage shenanigans. We wouldn't be there but for them. But many have embraced the show to near-cult proportions.

Our musician Kris Anderson, for instance, put together a spectacular promotional video to recap the events of Season Two, all set to his character music medley. Even if you didn't catch any of the shows, you have to admit the whole thing looks and sounds spectacular:

Kris has also been working on a super-secret Prognosis: Death! "thingy" with the talented Anthony Massingham (whom you may recall did the stunning artwork for Felafel). I can't say much more about the "thingy" yet, except that it will be on sale at the shows, and will be extremely addictive.

Sean Dowling is another fine artist of my acquaintance. You may remember his beautiful design work on the BAT's 2010 season brochure - and you'll see more of it in upcoming months, as he's already cranked out the poster for The Tasmanian Babes Fiasco, and is designing The Wah's for Catch-22. You'll also be seeing Sean's work elsewhere in 2010 - he's now the graphic designer for La Boite, which means his images are set to be splashed on a billboard near you.

In between all of this, he's created some fairly awesome fan art: 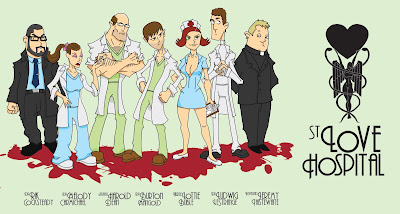 And Sean's wife Al Caeiro - who starred in the Felafel revival - will be back for Season Three to take more of her beautiful photography.

It's such fun being in this show, but what really makes it wonderful is how much other people love it as well. I'm surrounded by such talented people - I only wish I had the artistic skills to create photographs, artwork, and technical know-how to come up with something just as spectacular!
Posted by Girl Clumsy at 8:36 PM