My mother and I - along with millions of others - share a love of lavish BBC adaptations of great British literary works. I present to you now, my Top Five Favourite BBC Costume Dramas. 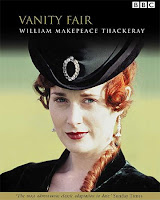 William Makepeace Thackeray's 1847 "novel without a hero" translates into a six-part series as brassy as the trumpet-heavy soundtrack. Natasha Little is perfect as the anti-heroine Becky Sharp, the fox in a feathered hat. Her beauty and charm fits the sumptiousness of the production - even the Battle of Waterloo scenes present a certain glamour. The casting is divine; every character wholeheartedly resembles their descriptive titles - the doe-eyed Amelia Sedley, the faithful Dobbin, the sleazy Sir Pitt Crawley and the villainous Lord Steyne. Screenwriter Andrew Davies filters Thackeray's satire of early 19th century society and conventions through a modern lens - more than any other costume drama, it makes us glad we weren't around in days like those, near intolerably cruel, greedy, cowardly or just plain stupid people like these.

Highlight - There's Something About Becky. She's so awful, yet so wonderful at the same time - a great character. I also enjoyed it when Osbourne cops it sweet in the chest from one of Napoleon's finest. Good riddance you nasty, nasty man.

Lowlight - the fact you can't watch it now without yelling at Philip Glenister to lose the Dobbin scowl and punch everyone out Gene Hunt-style, before peeling off in a turbo-charged hansom cab.

Thackeray's voice is the only thing slightly missing from Vanity Fair; a problem which this brilliant romp avoids by employing the ingenius device of Henry Fielding himself as narrator. John Sessions as the pudgy, tri-corno-wearing author and raconteur is a joy, always around to explain sudden cuts in action, or to poke fun at the characters as they navigate his tightly-woven plot. He's not above being a butt of jokes either, as this opening sequence shows. Max Beesley is fine eye candy as the knockabout Tom, the flawed yet likeable hero, and Samantha Morton is a revelation as his petulant love interest Sophia - not above temper tantrums and crocodile tears to get her way. Even more so than Thackeray, Fielding uses highly descriptive names for his characters - the foundling Tom's adoptive father is Squire Allworthy, his tutor is the B&D-obessesed Mr Thwackum, and his slimy, soft-spoken nemesis Mr Blifil. This six-part comedy is full of the spirit of the rollicking 1740s - there's plenty of drunken tomfoolery, shagging, a fair bit of actual tit and highly questionable moral choices. Good times, good times.

Highlight - there is very little in this world more hilarious than the sight of Brian Blessed yelling "Soooopphhhiiieeee!" and throwing a mad fit. It happens at least five times an episode and it's seriously funnier than "Gordon's alive!" from Flash Gordon . Also Kathy Burke as Sophia's common-as-muck maid Honour and the awesome Peter Capaldi as the horrid Lord Fellamar are wonderful character actors.

Lowlight - not enough Sylvester McCoy (as the lawyer Dowling). But that could be said of oh-so-many things, including Doctor Who. 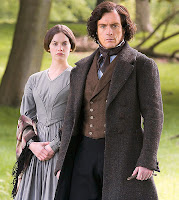 A 2009 adaptation of Wuthering Heights failed to light my costume drama world on fire; but then I've never really been a big fan of Emily "I'm such a middle child" Bronte's tome. It's a good read, for sure (and you could argue an even better song) but when it's put on the screen, I always end up wanting to thrash Heathcliff and Cathy for being intolerable gits. No, it's Emily's big sister Charlotte whose masterpiece Jane Eyre trips my trigger, particularly this 2006 adaptation featuring Toby Stephens in an utterly thrunchable turn as Rochester. Ruth Wilson is impossibly delicate as the petite governess; but she brings the internal strength and self-knowledge that makes Jane such a wonderful character. A fine supporting cast (including the usually cheery Pam Ferris as dour maid Grace Poole), a tight four-part script by Sandy Welch and a lush setting (Haddon Hall, in Derbyshire) makes this as dramatic as a walk on the moors, and as enticing as a mug of hot chocolate afterwards.

Highlight - The madness of Jane and Bertha. The former is all internalised, her mind laced as tightly as her corset, making the moments when she does lose control all the more fascinating. The latter's wild rages the most potent metaphor of what happens when you repress the Victorian female a bit too much. Fire, anyone?

Lowlight - Toby Stephens' constant self-mockery. Rochester is not supposed to be a handsome man, and so it comes across as quite ridiculous when the uberly-bonable Stephens gets around saying "I'm so ugly".

Yeah, you thought it would be number one, didn't you? You thought Colin Firth's superstar making performance as Mr Darcy would be a surefire bet, didn't you? Well, I'm glad I still have a surprise or two up my sleeve. There is no doubt that this six-part dramatisation of Jane Austen's most famous work is about as perfect as adaptations go - from the cast, to the costumes, to the script and dialogue, to the locations, and particularly the light pianoforte soundtrack music.

Julia Sawalha (then 29) turned in a phenomenal bit of acting playing the 15-year-old Lydia Bennett, topped only by Alison Steadman's hyperchondriac and hyperactive Mrs Bennett. Benjamin Whitrow is a charming Mr Bennett, sneaking sherry in his study to escape the cacophony of his "ridiculous daughters", and David Bamber is hilarious as the awkward nob-head vicar Mr Collins. Jennifer Ehle is the definitive Lizzie (Keira Knightley wasn't too bad, but still, go eat a sandwich), and Colin Firth is, well, Colin Firth.

Highlight - so, so many. Most punters would direct you to the infamous lake scene, but for the epitomy in sexual tension, check out Darcy and Elizabeth's dance at the Netherfield Ball.

Lowlight - um... gee. Reputation? Many people (blokes, a lot of them) refuse to watch this, thinking it a bit "lavender". But let me tell you blokes, you should get on to this. Mr Darcy is a text-book perfect example of what us literary-minded gals think of when we imagine a "good bad boy". That means a loner who's a bit snooty and up himself, but turns out to be so bursting with emotion that the only way he can deal with it is to stand at windows and stare out at nothing. Learn to brood, fellas. It won't necessarily help you keep the ladies, but DAMN you'll attract a few. I'd say pop on a cravat too, but Masterchef judge Matt Preston has kind of ruined those for me.

Elizabeth Gaskell's 1855 novel about love and strife in Britain's industrial heartland is one of my favourites (imagine Pride and Prejudice with a working-class conscience). So it was that I eagerly awaited this adaptation - and it outdid all my expectations. It hinges on the sterling lead performances by Daniela Denby-Ashe as Margaret Hale (my favourite literary heroine), and Richard Armitage as *swoon* John Thornton. The daughter of a clergyman who gives up his vocation to become a tutor in industrial Milton (based on Manchester), Margaret initially dislikes mill-owner Mr Thornton, for being the rough, brutish trade type her genteel social class warned her against. After developing friendships with mill workers, particularly the firebrand union leader Nicholas Higgins and his consumptive daughter Bessy, Margaret thinks her dislike has deepened. Of course, it hasn't, and despite intially rejecting his proposal in a heart-rending scene, she eventually realises he's the man for her.

Armitage as Mr Thornton has taken Colin Firth's broody football, and scored repeated touchdowns with it. He is resplendent in his angry brooding, heart-breaking in his lovelorn brooding, and just adorable in scenes with his mother, where she chastises him for broodiness, but he resolves to do it anyway. All of this with the most luscious slick of black hair, and a soft Mancunian accent. *Drool*.

Highlight - Not to be forgotten, my favourite scene is where Margaret, unlikely action heroine, saves Mr Thornton from angry striking mill workers. The ending of the book is beautiful, but screenwriter Sandy Welch wrote an absolutely gorgeous final scene to really take advantage of that whole "north and south" metaphor.

Lowlight - It just doesn't exist. This whole four-parter is perfect.
Posted by Girl Clumsy at 6:41 PM