I'm a big fan of the James Bond films. Some of my earliest childhood memories are watching them with my family, my Mum trying to remember which bits belonged to which film, while my Dad and brother gleefully took in the fight scenes, and ogled the lovely ladies as they gradually lost their ... inhibitions.

The first Bond film I saw at the cinema was 1995's Goldeneye, Pierce Brosnan's first outing as 007, and in my opinion still his best. 'Twas Boxing Day, and afterwards my family all went for a "walk" in some "state forest". You know, to be "outdoors" on "such a nice day". Well, having realised mid-film that my destiny was to grow up to be a super-fit, ass-kicking secret agent, I decided to go running. Like really RUNNING. I took off along the bush trail, the "dum-da-da-dum-dum" guitar licks on repeat in my head like my own awesome movie soundtrack. I was a MACHINE. I was going to be SO COOL. I was going to...

I still get the same feeling during/after watching Bond films - that gnawing sense of failure that I've lived almost three decades on this planet and have never yet speargunned a wetsuit-clad assassin through the heart while punning/and or shagging. It's interesting that many people ask me if I "want to be a Bond girl", and my answer is sure - but only because my gender restricts me from being Bond (Bond, like Harry Potter, Doctor Who and Robin Hood is a male character. Deal with that, and look to Xena for arse-kicking female characters to emulate).

Anyway, all this is leading me in a roundabout way towards my topic. I've decided to list the Bond theme songs in order of pretty awesome to THE MOST AWESOME. Then I promise I'll stop using the word awesome. For at least five minutes.

Important points to note: I've excluded the Monty Norman's classic "James Bond Theme" from Dr No, and the official Best Driving Music Ever - "On Her Majesty's Secret Service". That's because NOTHING beats those pieces of music when it comes to iconically Bond, and also because they don't have words. I'm also excluding Never Say Never Again - I don't CARE that Connery was in it, it's NOT canon and besides his hairpiece is RIDICULOUS. Same goes for the 1967 "satire" Casino Royale (take your pick with the hairpieces). Finally, this list doesn't reflect on what I think of the movies themselves.

So that leaves 20 signature themes to rank. Will there be controversy? Will anyone even care? Who knows! Let's do it anyway for Queen and country, keep the British end up, etc etc.

Esteemed composer John Barry - who wrote most of the Bond themes you can think of off the top of your head - must've been snorting 80s-brand coke off a Bond girl's baps when he came up with this one. He even got Tim "I make Andrew Lloyd Webber look good" Rice onboard to try to come up with some decent lyrics. But not even he could squeeze the actual word "Octopussy" into the song, and we're all the poorer for it. Instead, chanteuse Rita Coolidge (who?) faffs about with lines like "We'll take on the world and win/So hold on tight and let the flight begin." It's very 80s, and a good way to induce vomiting should you accidentally drink floor cleaner while waiting for the movie to start. Mind you, this was the Bond film that saw 007 in clown make-up. Maybe the floor cleaner isn't such a bad idea...

Yes, it may be the only Bond opening sequence to actually feature the vocal artist, but that doesn't make it great. Maybe I'm just prejudiced against the early-to-mid 80s Bond themes for being naff, but I tend to fast forward through this one. "Maybe I'm an open book because I know you're mine/But you won't need to read between the lines". Read between THESE LINES Ms Easton: "You may be a nice Scottish lady/You're No Shirley Bassey/Go Back to singing Morning Train". 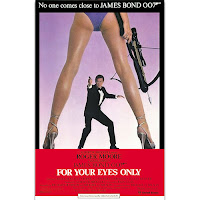 The brilliant, soaring opening riff is not enough to push "Licence to Kill" up in the rankings. It's a bit too love-songy: "Got a licence to kill/And you know I'm going straight to your heart". And it's not helped by the fact that Gladys Knight sounds like she's singing "I've got a licence to kilt", which is just not as tough (burly cods-out Scotsmen aside). She does have a brilliant voice, but this is more Broadway than Bond. It's a shame, because the song was composed by Michael Kamen, who's my favourite film composer - with The Three Musketeers, Brazil, Die Hard, Highlander and my favourite Robin Hood: Prince of Thieves among his credits.

I must admit to having a soft spot for this song. It starts majestically, and its twanging guitars lend a touch of smokey jazz to the Bond franchise. The lyrics range from amusing ("Darling I'm kill/I'm in a puddle on the floor") to sexy ("It's so deadly my dear/The power of wanting you near"). But unfortunately, co-songwriter Sheryl Crow can't pull off the towering chorus. She's too Nashville, and her voice sounds strained. Perhaps she was trying to mimic Jonathan Pryce's gloriously over-the-top villain, media mogul Elliott Carver?

Ah, a-ha. Nothing like a few schmick-haired Norwegians pumping out some soft-core pop/rock. I imagine they had wind machines blowing on them even when they where recording this in the studio. John Barry is listed as composer, but a-ha guitarist Paul Waaktaar-Savoy (whose surname sounds like a euphemism for masturbation: "Don't worry love, I'll just have a quick Waaktaar-Savoy") claims he had nothing to do with the creative process. Certainly the lyrics betray a certain sense of English being the band's second language -"Comes the morning and the headlights fade in rain" - so I wouldn't be surprised if in fact it was the work of those who gave us such other smash hits as "Take on Me" and... er... um... yeah. All those other songs. I may be taking far too much of the piss (in Norwegian it's "urin"), but in truth this is another Bond song I'll still happily dance about to pretending I'm in the video clip for it.

Tune in tomorrow as we continue the countdown...
Posted by Girl Clumsy at 10:14 PM