I bought a Frozen Coke yesterday.

A foolish drink for winter weather, absolutely. But damn it was tasty. And it had a nostalgia factor.

Proper Frozen Cokes are the best of the iced carbonated beverage options. Better than the 7-11 Slurpees, or the Night-Owl Slushies (who wants to add syrup to crushed ice anyway?). My local IGA has some weird granita machine. The flavours are far too sweet, like a frozen dacquiri sans liquor.

But proper Frozen Coke machines are getting harder to find outside large cinema chains and McDonald's - where they seem to cost a bomb. I suspect it's because Frozen Cokes were the drink of choice at Shell service stations, and since many of them have rebranded across to Coles, the Frozen Coke machines have been mystifyingly ripped out.

I first encountered Frozen Cokes when the Shell at Albany Creek opened up, back when I was about ten or eleven. It was just up the road from my house, and my neighbour Matthew Blake one day popped in carrying a bucket of tantalising pink stuff. Matthew was famous for his knowledge of available junk food in the local area. My Dad used to joke that Matthew studied the menu in the newly-built McDonald's (near the Shell) by leaning out of his bedroom window with a pair of binoculars. It was Matthew who'd introduced me to those delicious chocolate cigarettes. Remember those? They came in a box with a world city on them, and they were individually wrapped in paper. Ah, bless the days before anti-smoking fascism.

On hot days after school, or on weekends, we'd run up to the Shell (back then the shop was called "Circle K"), and grab ourselves a bucket of drink. It was awesome. The smallest cup was about 90 cents. The biggest - which would've hit at least 1.5 litres, was just $1.50. And it'd last forever - you'd be trying to drink it quickly so the ice didn't all melt and leave you with a weird sticky cordial residue at the bottom of the tub. 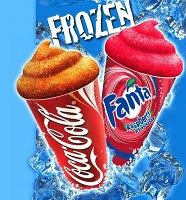 The BEST part was filling the slurpee. Those FOOLS at the service station would let you fill up your own cup. DON'T THEY KNOW I'M A SWEET-TOOTHED ELEVEN-YEAR-OLD? my inner monologue would cry. Each flavour (generally brown Coke and pink Fanta) had its own tap, with a handle you could twist. At the right consistency, you could manipulate the liquid in the classic spiral slurpee pattern so it thrust outward from the container, like a volcanic eruption of sweetness and delight. The sense of accomplishment I felt in mastering the Slurpee pour is one I've not forgotten. I have very few real skills to speak of, but damnit, I'm proud of that one.

So it was with some disappointment that I approached the Frozen Coke machine in the Shell on Bowen Bridge Road yesterday to find a brand spanking new machine - with NO HANDLES.

I had fancied a brief foray back into my childhood; a chance to turn the handles of fate once more, to be master of my carbonated destiny. But in their place?

Apparently humans are now so incompetent, or perhaps far too prone to carpal tunnel syndrome, that they need a green button labelled "Push Here" to release their Frozen Coke goodness from its frosty repository.

I grabbed the smallest cup, placed it under the tap, and pushed the button. The Frozen Coke wasn't the best consistency; it was more liquid-y, and gushed out in an unimaginative vertical stream. The cup filled quickly, but there was no ART to it. No POETRY. No risk, no potential for danger or overspill. It was uninspiring, to say the least.

The only saving grace is that the Frozen Coke remains cheap when offered at service stations. My cup was about 500ml, and cost $2.40. I know, I know, much of it is air and nothing and it deflates quickly, but still, it's a damn sight cheaper than the $3.50 Macca's charges, or the $17 you'll fork out at the large cinema chain.

Does anybody else have a fond childhood memory relating to slurpees/sweets/lollies/chocolates/ice creams/chips? Surely I can't be alone...
Posted by Girl Clumsy at 10:51 PM