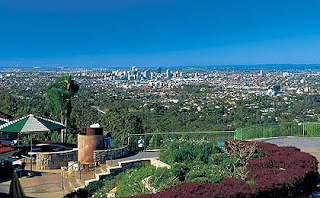 8.01am Arrive base camp (Planetarium & Botanic Gardens carpark). ‘Tis a fine morning. I had no trouble finding a park, surely a good sign for my first journey up Brisbane’s Maccu Picchu on foot.

8.06am Bidding a grand farewell to a mostly empty carpark, I embark on this most perilous of journeys.

8.07am The first treacherous assault, up several hundred metres at an incline of approximately 60 degrees*. I am taking the traditional “bitumen” path up the mountain, so I am forced to keep to the road “shoulder”, which presents a precarious loose stone hazard. Luckily my footwear seems up to the task.

8.10am Break to retie shoelace. Passed by a cyclist.

8.15am The first bend takes me onto the side of the mountain. The road shoulder becomes narrower, forcing me to venture instead into a grassy median strip. Passed by another cyclist. Egads, these men are mad. Mad! Do their legs not hurt from that relentless wheeling?

8.25am I am forced onto the road itself as the median strip ends.

8.36am I pause near the top of a bush track and listen to birdsong eminating from the trees. It stops when I attempt my best impression of Picnic at Hanging Rock and creepily call “Miranda! Miranda!” into the scrub.

8.39am Hills really are my natural enemy. Yet at this stage my knees are holding up well.

8.45am I am nearly wiped from existence by a Brisbane City Council bus, pulling off to the side of the road into a bay area. I strike up a conversation with its driver, a charming man named Bob. Bob is ahead of schedule, and has to wait about 40 minutes before his scheduled stop at the summit. He is a jovial chap, and the altitude doesn’t appear to affect him at all. He even tells me a joke:

“What did the bra say to the hat?”
“You go on ahead, I’ll stay and give these two a lift!”

The joke is the first merriment I’ve enjoyed all morning.

8.50am The Summit is in sight! Timely too, as my oxygen is beginning to run low. No tanks, obviously, just my lungs are starting to pack up.

8.51am I decide to make a final fast push for The Summit. I hum the Rocky theme song and break into a jog for the last 100 or so metres, up the spiral ramp onto the Mt Coot-tha lookout. Victory, at last! A full 2.6km trek uphill, completed!

8.53am As I catch my breath and down a bottle of water, a very fit man in his late 30s comfortably jogs up beside me. He is shirtless. Oh my. He asks if I have just run up. I scoff, and tell him this challenging mountain is not running terrain! He replies by saying he just scampered up from the Chapel Hill side through the bush tracks. Sweet merciful lord – is this man or machine? I gape in wonder, at his achievement, of course, not at the fine shimmer of sweat trickling down his well-defined abdo...ahem. He casts a brief eye across the cityscape, then jogs off again. I salute you, sir!

8.59am I pause for reflection, and to enjoy the sight of the city below, sparkling in the spring morning. The sun glints off tin roofs, and the skyscrapers of the CBD have an almost ethereal glow to them. Ah, if only Mallory could see this sight.
Posted by Girl Clumsy at 11:28 AM

Email ThisBlogThis!Share to TwitterShare to FacebookShare to Pinterest
Clumsy Categories: 30before30, adventures, natural world
Stumbling about in: Briz Vegas