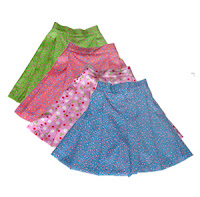 Combining the femininity of a skirt with the practicality of shorts, the modern culotte enjoyed a big revival in the 80s. Originally culottes referred to knee-breaches European toffs wore back in the 1800s. But of course, they were bound at the knee, not let to flow loosely a la the late 20th century version. Culottes as we know them began life as divided skirts, designed to make riding horses less revealing. By the 80s, they came in varying lengths.

I recall having a deep, abiding love for a pair of short culottes, circa 1990. They were navy blue, with tiny, brightly coloured stars on them, and a thick black elastic band. I teamed them with a yellow t-shirt, and looked totes amazing, long before "totes" was ever a word.

Culottes shouldn't be confused with the skort, although there is some crossover. Literally. Skorts had a flap of material across the front to hide the short element beneath. For high school that couldn't bear the idea of their young female students showing a hint of masculinity in their wardrobes ("How will we tell them apart from the boys?!?!"), skorts were the ideal compromise. They would be teamed with what my mother used to call "Gripper Knickers", or in some sectors, "Scungies" - basically, massive lycra underpants designed to keep your modesty intact on sports day.

Recently I was delighted to pick up a pair of culottes in a little discount clothes store in the Myer Centre. They fit like a dream, but I was sadly disillusioned by how big they made my backside look, so returned them to the rack. But I am still in the hunt for a pair of culottes for spring/summer 10/11.
Posted by Girl Clumsy at 5:45 PM