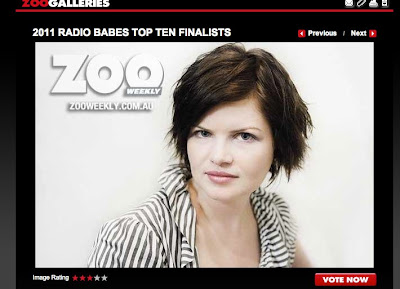 ... the whole story of how this came about is too hilarious for words.

But words is all I got.

A few months back, I was editing a shift out at the radio station. An email popped up from a publicity company, announcing the beginning of voting in the annual Zoo Weekly Hottest Radio Babes competition.

Now I've always had an affection for the blatantly ogling nature of the Zoo Weekly, Australia's most affordable and least discerning "men's magazine". This is probably due to Tony Martin's radio show Get This - which regularly examined the latest from the "Booty Bank" (a stockpile of photos of ladies' bottoms); and read out excerpts from the "advice" columns.

The Hottest Radio Babes contest has been running for a number of years - and generally features striking blondes from FM breakfast programs around the nation in various states of dress and/or undress.

So when this media release popped up, I shot off a bitingly satirical response to the publicity maven who sent it, bemoaning the ongoing lack of representation of the hard-working ladies of the AM band. It was a tongue-in-cheek shot at a competition fairly obviously based on the superficial.

What I didn't expect was the maven's response:

"Send us a picture - I'll be happy to put you in the nominations list!"

After some back-and-forth with the maven, which involved a lot of "You're joking, surely?" and "Seriously, send me a photo!", I decided to consult my boss. Despite my catastrophic general appearance, I actually do want to retain a shred of credibility as a journalist. But the boss came back with a thumbs up, and "Go for it!".

So, I sent them a photo (taken by the remarkable Aurelie Beeston) and a short biography.

And then I heard nothing more for ages. Once, I checked the site, and they had a "shortlist" of sorts - over 50 shots of radio ladeez from around the country. But I wasn't among them, so I figured they'd pulled the pin on my prank, and fair enough really. I promptly forgot about it.

Until last night, when my attention was drawn to the competition by a tweet from a radio colleague (one who obviously frequents the Zoo website more than I do).

I'm not sure exactly how it's happened, but I am now a Top Ten Finalist in the 2011 Hottest Radio Babes competition.

I spent most of last night and this morning just falling about with laughter. This is honestly one of the funniest and silliest things that has ever happened to me.

What's ever better is the fact my shot features ZERO cleavage. This is particularly humourous because you could come to any night of Prognosis: Death! Delirium this week and see my bust on ample display. I often joke about my cleavage being the only thing I bring to the impro stage. And yet, along with the amazing Amanda Keller, I am one of the most demure contestants in the Zoo Weekly poll!

I'm not sure how long the competition runs, but ladies and gentlemen - I beg your mouse clicks yet again.

Despite all that, I'm not really pleading for your vote here in the name of a higher feminist cause.

I am asking for your vote in the name of comedy alone.

Seriously - how funny would it be?
Posted by Girl Clumsy at 12:18 PM