It's been three weeks since I posted anything here. I can't remember a time when I left it so long; but the absence doesn't seem to have been noticed, or commented upon. It seems my regular appearance on social networks is enough for people. Over there, I am altogether too verbose. Over here, not enough.

It's been a busy three weeks with a few highs and a few lows. I've come here several times to try to write, each time I have sat, frustrated, unable to make a half-decent argument or summon up enough creativity to finish a piece. I don't know if this is writer's block, but certainly it is a writer's rut.

Hopefully all that's needed is a short post like this, just something to draw a new line in the sand. Then I can get back to the regularly scheduled self-deprecation and wildly speculative opinion pieces, and see if there still is some form of writer left in my brain.

But I'll leave with a quote from the new The Adventures of Tintin film, which I had the pleasure of seeing recently.

There's a scene where young Tintin, frustrated after chasing a lead that runs cold, dejectedly admits he's 'failed'. His companion, Captain Haddock (in my mind, the greatest brilliantly-flawed literary character since Falstaff), rounds on him, and in Andy Serkis' best Scottish brogue, tells him:

"Failed. There are plenty of others willing to call you a failure. A fool. A loser. Don't you ever say it of yourself. You send out the wrong signal, that is what people pick up. Don't you understand? You care about something, you fight for it. You hit a wall, you push through it." 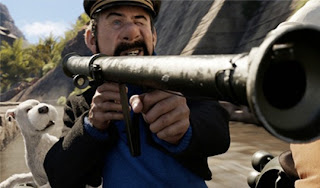