I don't know when it began, but it feels like it's been going on for months, like the Republican primaries or the reality TV shows about weight loss.

Google tells me they are Indian Meal Moths, and they are damn hard to be rid of.

I've had them before in my pantry, but never as bad as they seem to be at the moment. They're in everything, these tiny winged terrors. Worst of all, they tend to like foods they actually physically resemble, like oats and rice and motherf***ing sunflower seeds:


I think the meal moths have overtaken geckos as my new freak-out-creating creature of choice.

Actually, I think the geckos are part of the problem. Or rather, the lack of geckos. Is it just me, or are there very few about this summer? Perhaps it's the rain. Good to moths, bad to geckos.

I know that the geckos used to eat the damn moths, keeping them under some semblance of control. I know this because once I put a sticky pantry trap in the cupboard to get the moths, and a gecko got stuck on it. It was an anguishing thing to happen, as I wanted to help the gecko free, but I'm so terrified of geckos that I couldn't bring myself to touch it. I had to wait half an hour or so for The Wah to get home, so he could tear gecko's fragile body from the sticky paper. Oh God, the anguish.

The Wah, who is St Francis of Assisi-like in his affection for all animals, got the gecko loose (although it did leave several dermal layers behind). He set it free on our balcony, and it scampered away, I imagine to die somewhere quietly. But at least we did the right thing. Well, The Wah did the right thing, and I just squealed disgracefully in the background.

But the Hitchcockian tale of The Gecko Vanishes has left my larder in a mess. So much so that I unwrapped another pantry trap to see just how bad the situation had become. After a mere four days in action, hey presto, the killing fields... 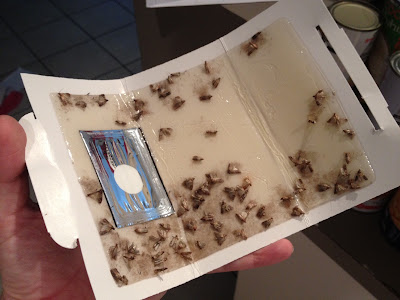 Today I launched a scorched earth policy. I turfed everything out of the pantry, and chucked most flours, cereals and grains. I vacuumed the shelves to suck up any little cocoons of awful sticking to the laminate. I spray cleaned and sponged.

Then I went to Howard's Storage World to buy Storage. I don't know who Howard was, but by goodness, he knows how to put things in places. Expensive places too. I refrained from purchasing more dry food storage containers, because they were about $30 a pop. But I did pick up some plastic trays with handles to replace the baskets I'd been using, and which I suspect had been secret bases for meal moth expansion. Now the pantry is re-organised, re-freshed, and hopefully, de-mothed.

I am going to install another pantry trap and monitor the situation. But any advice on keeping these little buggers away is welcome.

Have you ever had an infestation? What creatures afflicted your home? And can you ever get rid of these things for good?
Posted by Girl Clumsy at 11:49 PM