I've been on the Queensland state election campaign for a while now, and I've been getting an increased volume of messages from people spotting me on the TV news of an evening, standing behind a politician.

I've been covering the ALP since the campaign started; tomorrow I switch to the LNP for a while. But no matter who I seem to stand behind/next to, the response I get from people is always:

"You look so BORED!"

I've even had a few people suggest that I should "smile more". But the thing is, there are very few facial expressions one can adopt when in such a position. Think about it. If you were to tune in and see me smiling away, you'd either think I was politically biased towards the featured politician, or just clinically insane.

So I try to go for the classic poker-face, but in my case, that seems to equal a vision of crushing dullness.

But there's another reason why I try to keep a straight face and my focus on my recorder.


I've found myself getting rather distracted by eyelashes. Yes, eyelashes.

I'd never really considered eyelashes as something to spend much time looking at. But eyelashes seem to have jumped up the beauty batting order. Eyelashes are the new black.

I credit a couple of things for my newfound focus on bits of hair protruding from eyelids, because when you put it like that, it sounds disgusting. The first is that a bunch of make-up counter dollybirds told me I had "long" eyelashes, much to my surprise. I always thought they were stubby.

Then, for giggles, I had fake eyelash extensions put on. The installment process was possibly one of the most torturous experiences of my life, and this is coming from someone who undergoes waxing on a regular basis. The smell of the glue was so pungent, it caused my eyes to leak more than Kevin Rudd during an election campaign.

But despite this slavish service to the temple of beauty - not one bloody person noticed the bigger, fuller, blacker lashes suddenly sprouting from my mug. Certainly not enough to comment specifically. I don't know, maybe they were being polite. But their seeming lack of their observational skills seemed to hone my own, so now I find myself randomly staring at strangers' eyelashes.

And let me tell you, I'm sure I'm not the only one having work done on their hairy lids (you see? Disgusting). Those aforementioned make-up counter dollybirds are a prime culprit - with the number of fake eyelash options second only to the amount of fake nails you can get.

And every mascara advertised promises to make your lashes thicker, curlier, bolder, fatter, stronger, longer, blacker, bouncier, stretchier and bat-a-ble. I personally have amassed a reasonable collection, considering you really only need one mascara at a time. 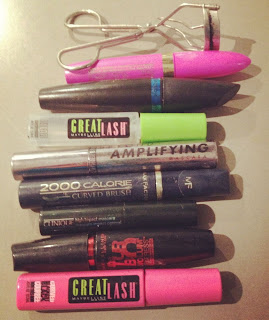 The problem with all of these mascaras is that none of them seem to do what I need them to do most - and that is to NOT melt off at inopportune moments.

This is one of the reasons I rarely wear mascara during the day, because my attempt at glam eyelashes generally end up making me look like a panda who spent the previous night drinking Yellow, watching The Notebook and Facebook stalking their ex-boyfriend. And nobody ever tells you. You get home, having spent the day thinking you're looking half-decent, only to realise you look like spiders have died on your face.

I don't know how other women do it. I keep noticing these beautifully groomed eyelashes, full of body and bounce and no trace of errant mascara. It makes me want to cry. Except I can't, because I'd ruin my make-up.

However, I think there should be a cautionary warning on the eyelash chicanery before things really get out of control. I saw one young lash, sorry, lass, wearing such ridiculous fakes that she looked like she'd fallen head-first into a glue factory, then gotten lost in a pile of twigs. Forget what Max Factor or Napoleon Perdis say and listen to Isaac Newton - you just can't defy gravity that much.


Do you find yourself drawn to particular physical features in others?

Let me qualify that.

Do you find yourself drawn to particular physical features in others - that AREN'T boobs?

Thanks to Dan for the wonderful bodgy photoshop.
Posted by Girl Clumsy at 6:07 PM