I attended the lovely wedding of my friends Alister and Erin yesterday. Here's a picture of all three of us taken in the Photo Booth they had at the reception.

I tell you what, aren't those photo booths hugely popular now? I've been to three functions in six months that have had them. They're pretty fun, and it's always good to give people something to do at a reception, I find, apart from supplying non-stop free booze, of course.

Anyway, we had an hour and a half between the end of the ceremony and the reception, so a crew of the improviser contingent (we're Al's nerdish comedy friends) headed to a pub for a preparatory libation and some relaxed banter.

The front bar had a few copies of The Courier-Mail lying around, so I had a flick through, and lo and behold, came across this on page 7 of the Life lift-out section. 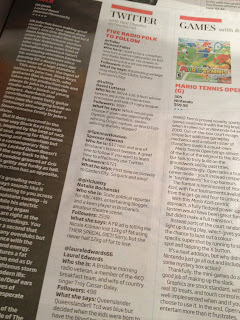 Thanks to editor Rod Chester, aka @Chesterrod for including me. It's lovely to be called an "entertaining blogger". I'm going to have to learn to juggle flaming sticks or something to provide more entertainment going forward. Maybe I could jelly-wrestle a lion or perform a tracheotomy on a recently arrived immigrant or something. Suggestions welcome, obviously.

One thing I definitely CAN do is point you in the direction of ImproMafia's upcoming Theatresports Gold Coast show. It's happening THIS Saturday 2 June at The Arts Centre Gold Coast.

It's just $20 a ticket, $17 concession. It's our first show on the Gold Coast, and we're really excited. If you're a local, and you enjoy live comedy, do come along. I'm the MC for the evening, so I can guarantee you a big night of laughs. Or I will personally beat our performers with birch branches.
Posted by Girl Clumsy at 5:38 PM