The Tyranny of Long Hair


Vidal Sassoon died this week, and it made me think of practical hair cuts.

I didn't realise Vidal was credited for inventing "wash-and-wear" hair styles - the idea that you don't need to subject your locks to hours of primping, perming, pinning and shellacking, just comb it and go. Vidal supposedly set us free from oppressive hair.

But I would argue that many women still labour unnecessarily with their locks - because fashion remains in favour of long hair for women. And I would like to start a movement encouraging women who are living with long hair - but, importantly, not doing anything with it - to lop it off, and try life with lighter, shorter tresses.

I've always had tricky hair - thick and bothersome. As a girl, it was blonde and straight. Pubescent hormones saw it grow thicker and darker, and a 1993 haircut saw the surprise appearance of tight curls, and led to me being dubbed "Afro" for a year at school. I worked with the curls as best I could until my late teens, when I decided to try to grow it long and luxurious. I imagined all the beautiful ornate hairstyles I would wear - the cute high ponytails, the braids, the chignons.

What I ended up with was this: 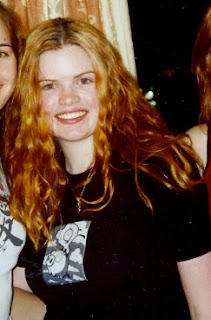 This is me on my 21st birthday, with a ratty, poorly-cut, badly-coloured, brassed-out curtain of hair. You can see the curl from my teens still in there - a curl that disappeared somewhere in my mid-twenties, along with my cheekbones. But you can also get a sense of how thick and heavy my hair is - it pulls down so much the top half is virtually straight.

I couldn't bear to put it in a high ponytail: the super-tight hairband would give me a headache. Wearing it out was annoying in the wind or the heat. So I would end up pulling it back in a low ponytail at the nape of my neck. It looked boring. It was boring.

It was also a pain in the arse to manage. Every wash was torture, as I combed out the knots that would build as I slept. Complicated hairdos were virtually impossible - no amount of bobby pins would hold those suckers up.

Eventually I realised I would never achieve the beautiful tresses I admired in magazines. I had the hair, but without the money or patience - what was the point?

Around a year after the above picture was taken, I went to an expensive hairdresser and had much of it lopped off. Throughout the 2000s, I went shorter and shorter. Before our big world trip in 2006, I got an ill-advised pixie cut, and while it was good for travelling, I realised my hair is too thick and puffy and my face too round for it to work well.

And so now I've found the general length and style that seems to work - and you know what? It's great. On rare occasions, I wonder if I could grow it again. I have more money and better hair care products now than I did at 21 - perhaps it would be a different story? But then I think... oh, I can't be bothered. I am lazy. And I don't want my head to be weighed down all the time.


I know many women who keep long hair because of what I consider to be slightly dodgy reasons, and I'd like to offer some simple rebuttal arguments, to see if my position does in fact have any credibility.

Answer: it's one idea of femininity. Not the only one. If you're worried about not looking enough like what you think a woman should look like, may I suggest a push-up bra and some red lipstick?

It's hard to deny Hollywood and the fashion and music industries tends to prefer long-hair in their ladies. But remember, these women have stylists, and money, and helpers, and money, and time, and money. Their hair becomes part of their job. But even they resort to help - Beyonce and Lady Gaga love a wig. And also, long hair seems to be a de facto term for "beautiful". She must be pretty, she has long hair. Think Kardashian for a moment. Take away the long hair, and what have they got? Weird teeth, that's what.

Apparently long hair works better for "up dos", which are apparently better for weddings and wedding photos. I'm not sure why this attitude still exists, but then I know very little about weddings in general. If this is your preference, I don't see why a hairpiece or hair extensions couldn't work just as well - they might be slightly more expensive, but then, it's a wedding. They cost money. Just ditch an unwanted guest or two, or forego a band for a karaoke machine. I'm an ideas woman.

And that is entirely fair enough. I'm not trying to hassle people for their appearance. I really believe you can do whatever the hell you want with your body. But my argument is aimed at women who have long hair, but don't do anything with it. Maybe it's a hassle, maybe they just don't have time, and always end up tying it up, or back. I know one woman who keeps it long because she sweats around her hairline. She thinks short hair would make her sweat more. But I always think of her as a short-haired woman precisely because she always wears her hair tightly pulled back in a bun. I've never seen it out. So what's the point? Chop it off, get a crop, rock it. You'll be sweat-free, you'll get time back, you can get out of the shower, rub on some pomade and go.

Long hair is a tyranny. It's time we realised it, and started freeing ourselves. Use it or lose it. It won't be the end of the world.