Wednesday saw me covering the Prime Minister's Economic Forum at the Stamford Plaza. Now I'm not saying it was dull, but I did spend a great deal of time sending tweets to Lady Gaga: 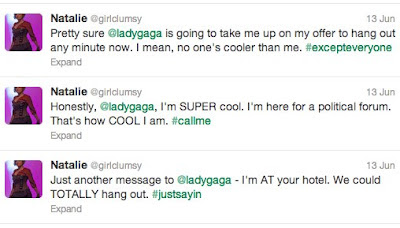 I suspect mobile phone problems on her end, because for some reason Mother Monster didn't hear my plaintive cries. It meant I only saw one person who gets criticised for her fashion sense. 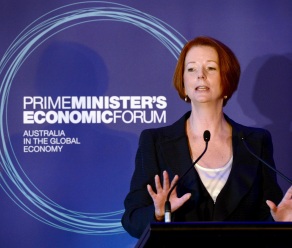 Anyway, the lack of Gaga goings-on at the Stamford meant I was even more excited to attend her Born This Way Ball on Thursday night. I'd had a rough couple of days; with a general malaise settling over my world view. Two hours of thrashing about in a mosh pit was just the tonic I needed.

Luckily my friend and concert buddy Janet was as keen as I was to dress up as "Little Monsters", so we spent a few hours going a bit crazy with make-up before heading to the train station. I don't really have much Gaga-esque options in my wardrobe, so I dragged out my steampunk corset and drew cogs on my face. 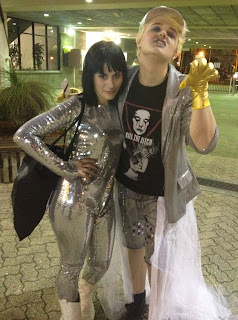 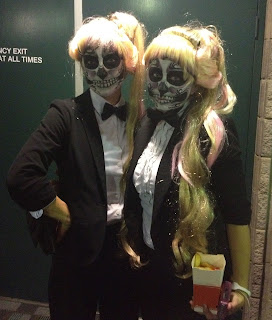 Then there's this guy, who just wins at life:

We took up our places about two-thirds of the way back in the floor section, about 20 metres from the cusp of Gaga's circular thrust walkway. It wasn't long before the lights dimmed, a castle appeared and the show was underway.

Then Lady Gaga came out on a horse, dressed as a Predator. 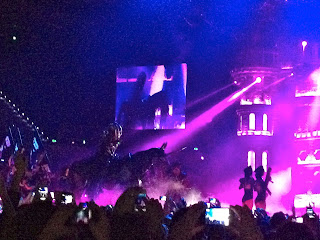 After shooting a bloke for being a cunning linguist (if you get my drift), she turned up on top of a large inflatable belly and legs, and gave birth to herself. 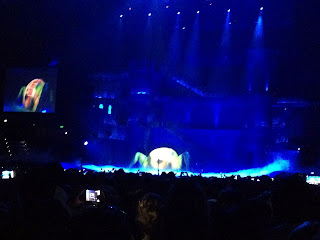 And then she cranked into Born This Way and I created my own little quarter of a square metre dancefloor and boogied as carefree and as carefully as as only a woman in a corset can.

That's a point. Frankly, I was unimpressed with how many people around me weren't actually dancing. I realise it's harder to see the stage from the floor, and you want to enjoy the scale of it all, but still, get a jig going or something, or better yet, if you're not going to dance, get yourself a seated ticket.

A few songs in, I felt a hand on my right shoulder. I look over, expecting it to be Janet, but instead it was a blonde woman, probably of similar age to me, completely going bananas with delight. She asked me did I mind if she used me to get a boost, saying "You're just so tall!". I wasn't even in very high boots. I told her to knock herself out, so every few minutes she'd push herself up using my shoulder as balance to get a better look. I honestly didn't mind because at least she was fricking dancing, not standing there with crossed arms.

The basic plotline of the show was that Gaga was visiting a moon base called G.O.A.T - a Government-Owned Alien Territory - to gather ideas and inspiration from the people of Earth before her new race of higher and more fabulous beings invaded Earth. There was also a sort of hologrammatic Mulligrubs-style Gaga face hanging from the ceiling, and acting as some sort of narrator/overlord. 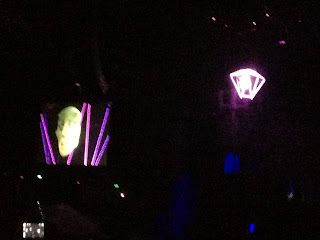 But, you know, what evs. It all provided the backdrop for a brilliant array of dance numbers and costume changes, all seamlessly integrated. She does love a sequin or two, Lady Gaga. Not to mention getting her ass out there. One outfit seemed a tribute to Cher in the Turn Back Time video; at another point, she whipped off a skirt to reveal pants, which she then tucked INTO her bum crack, which is the exact opposite of what most people do.

One of my favourite routines was Bloody Mary, in which Gaga, dressed like a futuristic Miss Havisham, was wheeled about the stage, with some sort of segway concealed beneath her dress. It was high-concept, perfectly executed and suited the timbre of the song beautifully. 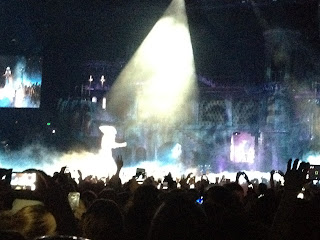 Crowd favourites Bad Romance, Judas and Alejandro were amazing, and I enjoyed seeing the routines for some of the less-known songs from her latest album, including Electric Chapel, Bad Kids and Highway Unicorn (Road to Love). Americano in particular was great theatre, as Gaga wore a replica of her famous meat dress, and danced in front of hanging carcasses, before chasing off some mafioso-types with M16s. Guns and red meat, that pretty much sums up America to me.

The slower part of the show, where she played piano herself to sing Hair and You and I were actually delightful. Her voice is truly stunning and she wields it like a axe, forceful and precise.

Telephone was particularly sensational live. Here's a bit of Janet and I getting into it:

Ahhh, I wanted to drown myself in the majestic pop-ness of it all. When Lady Gaga told the audience that she wanted to be their hopes and dreams, I mentally took her place on stage. I reckon I could be a rockstar, you know. I think most people think they could be. But I suspect most people are drunk at a karaoke bar when they think that.

Throughout the concert, Her Gaga-ness preached acceptance, self-love and tolerance. Cynics may call it glib, but it's still a nice message. Although when she rounded on the crowd and asked whether they gave a "f***" about what people think of them, I did turn around and yell "No, but I probably will again tomorrow!" It was mostly a joke for Janet, who had been standing just behind me, but when I turned, she'd disappeared, and the group of women who'd taken her place didn't seem to get it.

Lady Gaga closed the show with Schiesse, shooting the big face thing with a ray gun, declaring that she had taken all the ideas she could from us, and her army was ready to invade Earth. They wore black uniforms and even jack-booted a bit. Nice.

Of course we knew that wasn't the end, because there were TWO songs she hadn't yet performed.

And then she appeared, decked out in a cloak, in the top tower of her castle, and started singing the epic Edge of Glory slowly, before the band and the beat kicked in. After that it was time for one of my favourites - Marry the Night. This is the only bit of Gaga I filmed (I assume illegally), but I just had to capture that final key change near the end of the song. I don't know what it is, but that one key change - about 15 seconds into this clip - makes me feel like I can conquer the world. Which is nice.


All in all, a top night out, with the only downside slightly sore feet (sneakers just wouldn't have gone with my outfit).

I will be interested to see how Lady Gaga's career progresses. Her first album is about the quest and attainment of fame; her second about acceptance and loving yourself. But she's achieved such massive stardom so young - her life since her early 20s has been work, work, work, and eventually she's going to have to move away from that section of her experience. It's lovely to hear her personal stories about bullying and rejection in the slower parts of the show, and I believe she means her message about being true to yourself and working hard to reach your dream. So what's next? Who knows. But I daresay it'll be fun to watch.
Posted by Girl Clumsy at 10:00 PM