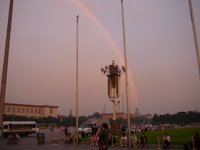 Rainbows over Tiannamen Square. You can see Greg filming in the foreground. 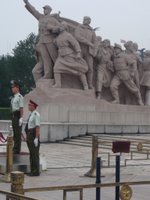 Monuments outside Mao's tomb. Showing the brave journey forward of the Chinese people and the CCP. Or something. 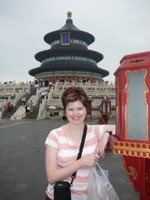 In the Temple of Heaven. This main temple is commonly used on advertisements and posters spruiking anything from phone companies to the upcoming Olympic Games. 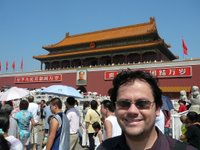 Greg outside the Forbidden City, now known as the 'Palace Musuem' (the irony of calling somewhere 50, 000 people visit per day 'Forbidden' not lost even on the Chinese). You can see Chairman Mao's friendly face smiling down mid-shot. 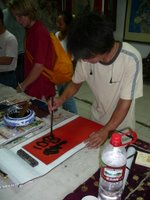 Michael, the charming university student who happily relieved us of 160RMB (about $30) to calligraphy our names and the word for 'Good Luck' onto a scroll. As Greg maintains, it was the nicest fleecing we've ever experienced. 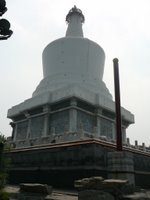 The White Pagoda, inside the massive Beihai Park. It's on a hill and therefore one of the highest points in Beijing. You can see the Pagoda pretty much everywhere. Well, if it's not too polluted, that is. 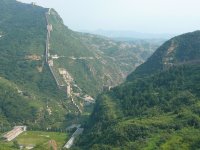 The f***ing Great Wall of China. Look at the bastard. Now decide if you'd like to clamber up and down that for 5 hours in the sun. 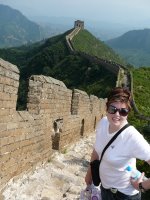 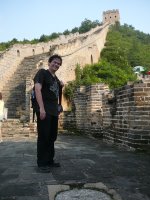 Greg at the end. Can you believe it? The end of the walking bit!!! After this we got to go down the flying fox, then take a wee small boat to the Simitai complex of shops & cafes etc. The flying fox was cool - 30 seconds off my aching feet!
Posted by Girl Clumsy at 7:14 PM