At last! We have free and unfettered access to the internet, courtesy of Debbie and Eoghann, Greg's sister and soon-to-be brother-in-law. We're in the process of downloading then uploading the photos to my Yahoo! Photos account. You can access them here; but be warned, they're out-of-order and unlabelled. So I'll put up a few over coming days to give a brief taste of our adventures so far. 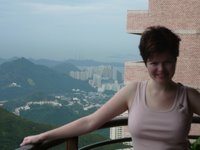 The view from my Uncle Jan's apartment - 20 stories up at Parkview, a mammoth residential estate in 'country' Hong Kong. 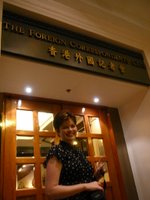 Me outside the Foreign Correspondents Club in Hong Kong. Still about the closest I've got to doing anything related to journalism. They had a wire service in the lobby! Eee! 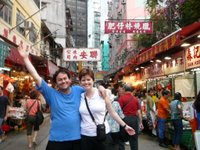 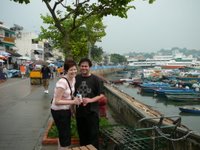 Enjoying the humidity on Cheung Chau, one of the many islands that surround Hong Kong Island and Kowloon and the New Territories (the mainland). Note the grey skies. That's pollution, swept down from industrial southern China by a typhoon. 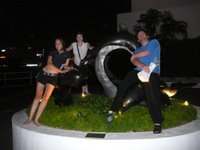 Greg and I posing with my ever-so-grown-up cousin Natasha outside the Royal Hong Kong Yacht Club (they voted to keep the 'Royal' even after HK was returned to China in 1997). The yacht club was modern, but retained a certain feel of colonial supremacy. Well, I felt posh going there at the very least. ;)
Posted by Girl Clumsy at 3:48 AM