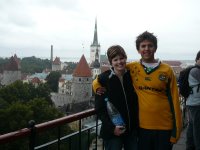 Double Bochenski trouble! We met up with my brother Simon in the Old Town of Tallinn, the gorgeous, World Heritage-listed capital of Estonia. 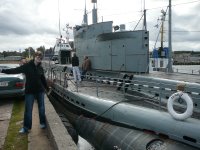 We visited this Estonian Navy submarine, called the 'Lembit' during a bike tour of Tallinn and surrounding suburbs. This was one of two built for the Estonian Navy in the 30s. One was destroyed during WWII; the 'Lembit' went on to be used by the Russians as a training sub. 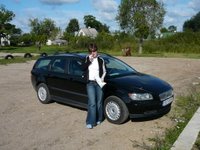 I don't think you're ready for this jelly... Black, beautiful and with a big booty - meet Beyonce, our Volvo rental car who drove us in style from Tallinn to Riga. 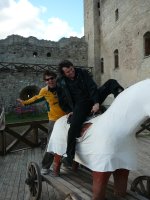 Smacking the pony at Rakvere Castle - a restored castle which now hosts a historical amusement park of sorts. 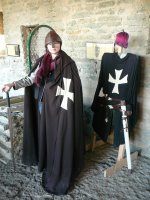 A history of armour was just one of the delights on offer - with wearable props! 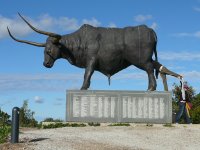 The hill opposite Rakvere Castle played host to this giant bull statue. This would be just one of many so-called 'comedy' shots we'd take on this road trip. Pulling my brother's head out of a bull's arse. Classy. 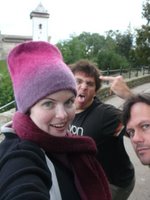 I love this self-portrait: taken at Narva, the Estonian border town which looks across the river to Russia (with opposing castles and all!). I think it sums the three of us up quite well. ;) 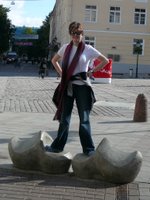 At Tartu, the second-biggest city in Estonia and known as a university town. The most memorable feature for me was the bollards, which close off various streets to cars. Each set was shaped differently - turtles, rocks, bird heads...and yes, giant clogs! 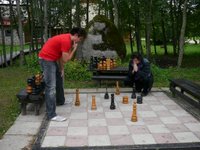 Greg and Simon musing over their next moves. This giant chess board was one of the fun features at the Hotel Waaide, in Elva, Estonia. This photo may have been slightly staged (but their expressions are brilliant, don't you think?) 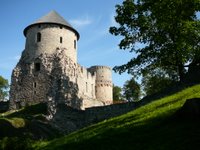 Across the border and into Latvia! This is Cesis Castle, an interesting half-ruin, parts of which are in the process of being restored. Cesis has been a hotbed of Latvian patrotism for centuries. 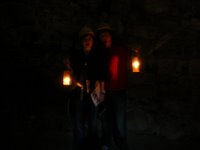 We had to don hard hats and carry lanterns to explore less 'modern' parts of the castle! 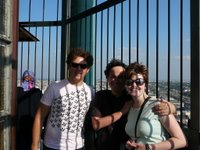 Riga! The gorgeous Latvian capital. This was taken atop a spire on one of the many churches that litter the Old Town. Seriously, there were two within about 12 metres of one another. 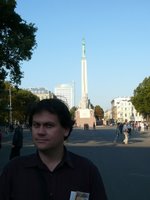 Greg and the Freedom Monument. Soldiers stand watchfully beneath her, and march very slowly when it's time to change the guard!
Posted by Girl Clumsy at 9:46 AM