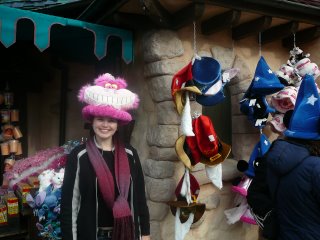 I must first apologise for the lack of action lately on the ol' Clumsy blog. I've been slacking off. The thing is, I wanted to try to get up-to-date with my photos. The days just kept passing, and now I realise it ain't going to get done before the next big leg of the trip - Morocco, Spain and beyond. I've spent some time getting Estonia and Latvia done - mainly because there were so many photos that made me laugh, I wanted to share some of them! But the rest I think will have to wait.

However, you CAN see all our photos on my Yahoo! Photos page. They are grouped in sections, but they're not in order and are unlabelled. But you can certainly get an idea of what we've been up to!

Greg has been more diligent than I in terms of keeping his blog up-to-date. But I should give cursory mention to Debbie and Eoghann's Muir of Ord wedding, which went off without a hitch on Saturday 14 October. A great day all round - I particularly enjoyed the cailedh dance after dinner! The wedding was the day after my birthday as well - thanks to all the well-wishers! It was a quiet birthday, but very nice, as I received some lovely gifts and a yummy cake with pink icing (mmm, sugar).

We spent a few days back in Glasgow recovering, before meeting up with my Mum, Dad and brother Simon at Glasgow Prestwick airport, and jetting off to Paris for a few days. I had gone and left my bloody jacket at Debbie's (yup, I'm a bit of a nob), but luckily Paris wasn't too cold and only a teensy bit rainy, so my fleece was enough. Paris was lovely as always - and sad and commercial though it may seem, our trip to Disneyland Paris was a highlight. The picture above features me in a fetching Cheshire Cat hat. However the only souvenir I actually bought was a piddling fridge magnet. It just wasn't worth buying all that Disney crap that's made in China anyway and freely available for purchase at Disney stores in Australia!

We returned to Glasgow and after a brief overnight stop in Prestwick town, headed up to the Highlands once more to embark on our family boat cruise down the Caledonian Canal. My Uncle Ken and Aunt Edna met us there - we were a bit late despite the genius of the 'TomTom' - my Dad's new GPS device which he had tricked out with UK maps. He's a little too obsessed with the TomTom for my liking - I think he wants to write it into his will as the child he never had. I suppose it's more reliable than me! ;)

We had a great time on the boat - it was a 13-metre long cruiser, and we motored from Laggan on Loch Lochy, through Loch Oich, down the five locks at Fort Augustus and into Loch Ness, and up the river Ness to Inverness (yup, there's a whole lot of Ness going on). Sadly we didn't see any sign of the infamous 'monster' - Nessie was keeping her head down, no doubt due to the increasingly chilly weather! It was bloody cold, windy and choppy on Loch Ness the day we first crossed it - luckily it calmed down for our return trip. Mind you, seeing the beautiful autumn hues of trees shedding their leaves for winter was worth it. It makes you realise just why so many people in the northern hemisphere list autumn as their favourite season - the countryside is awash with every shade of brown, red, yellow, and orange imaginable!

We finished up on the boat on Thursday morning - and bid a farewell to my Mum, Dad and brother, all of whom are about to head home to Australia. Thanks for coming over guys - it was great fun to have a family trip, even if watching 'The Top Ten Celebrity Sex Tapes' on the boat was a bit trippy! (yes, I'm serious, they have programs like that over here).

It took us a while to get back to Glasgow from our bus stop at Invergarry near Laggan - we were early enough for the 10:23am bus but the bastard driver wouldn't let us on, because our tickets were listed for the 12:54pm. His bus was pratically empty and it was a windy chilly day, but he still wouldn't bend. As luck would have it, the hotel was being handed over to new owners that very day and the exiting owners wouldn't let us inside to keep warm. So we wrapped ourselves in a sarong and read magazines for three-and-a-half hours. Much appreciation to my Mum, who brought me over TWO pairs of gloves after I'd lost mine somewhere on the Vodkatrain. Greg and I were able to keep both our hands warm!

We've got a few days to kill before we head to Morocco, so tomorrow (actually, today!) we're heading to Brussels, the home of chocolate, beer, chocolate-flavoured beer, the EU, and TINTIN! TINTIN! Did you all hear that? Freaking TINTIN! My friend Alisha and her husband Mark visited Brussels earlier this year on their honeymoon so I KNOW the place is chockers with Tintin stuff. It's like my idea of heaven!

Thanks to everyone who's been reading and/or leaving comments. It's always lovely to hear from those back home. I promise I'll try to be more entertaining in future!

P.S. I discovered that the impro show in I sometimes played in at O'Malleys Irish pub in the Queen Street Mall is finishing up this Halloween Tuesday. I would urge anyone who has a free night to get along - the show normally starts at 8pm and it's free! I don't know if any of the Impro Mafia people know about my blog, but I certainly wish them all the best with their last show and getting a smashing new venue!
Posted by Girl Clumsy at 10:33 AM