When you live in Australia, every Christmas-time, regular as clockwork, there'll be a story on the news about freak festive weather in the U.K. The ultimate upshot is that heavy fog or snow or sleet or frost or some other goddamned winter-related meterological condition plays havoc with airports, flights, train travel, car journeys, you name it, and a bunch of pasty British people get angry about not being able to get home for Christmas. Watching these reports in Australia, you chuckle and think 'Glad I'm not over there this time of year!' (normally unaware of the irony that these reports are usually preceded by the latest devastating bushfire in Victoria or NSW).

Anyway, my point is that this year, I got to experience that story first-hand, as our flight from Rome to Liverpool on Thursday was cancelled due to heavy fog, and we had to get on an alternative flight to London Luton and rent a car to get up to Scouser country. We drove through genuine pea-soup fog most of the way up - I really did feel like I was in a bleak Emily Bronte novel or something. In hindsight we were lucky: hundreds of domestic and European flights from Heathrow, Stansted, Glasgow and other British airports were cancelled, with travellers forced to queue for hours - often outside, for goodness' sake - waiting for the fog to lift. Apparently it's only going to start getting back to normal on Saturday 23 December - hopefully leaving people enough time to get wherever they need to be for Christmas. At least we got through to the U.K., managed to rent a car at a "reasonable" price, and only got in eight hours later than we were supposed to. The cancellation also gave us the opportunity to meet Catherine, a lovely young Canadian student who was due to return to the Land of the Maple Leaf the next day, and was very worried about how she would get back to Lancaster, north of Manchester. She chipped in for the car hire and we drove her to Manchester Airport, where she caught a train. Hooray for friendships forged in challenging circumstances!

We spent just over a day in the company of our friend Mixmaster Mike, whom we acquired as part of the Nat 'n' Greg posse back in Greece. Big thanks to Mike and his family for putting us up so close to Christmas. Mike took us out to see downtown Liverpool, and we were quite impressed. Once reknowned as a dirty port city, full of unsavoury types, Liverpool is now a bustling metropolis with construction going on everywhere. It's also won the title of European Capital of Culture in 2008, so it's going great guns. And boy, they sure love the Beatles. Beatles, Beatles everywhere. Yes, we went to the Cavern Club, and took our photo with the statue of John Lennon in Mathew St. But that's really all the Beatles' stuff we did. Although we did drop our rental car off at the new Liverpool John Lennon Airport, which has the rather sweet motto of 'Above Us Only Sky'.

Today we picked up our pre-booked rental car and made our way up the M6 and M74 to Glasgow. Back in Scotland! My goodness. We head up to Inverness later today for five days of festive fun with family, then we're back down for a knees-up New Year before we start the big effort of packing in preparation for our return to Oz. I really, really, really hope to have some money left over so I can buy myself some nice clothes from the stores here. Greg just doesn't understand that, yes, while we have clothes in Brisbane, we just don't have the variety that they have here. Mind you, Greg's also looking to pick up another swanky coat from Zara, so it mightn't be too hard to convince him to go shopping after all... 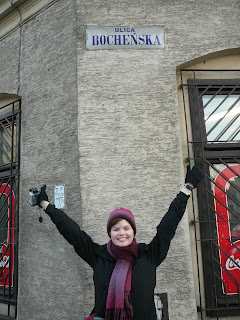 This is an honest-to-goodness street located in the Kazimercz district of Krakow. It was a little scruffy, but then, I'm hardly the epitome of polished sophistication now, am I?
Posted by Girl Clumsy at 12:24 PM