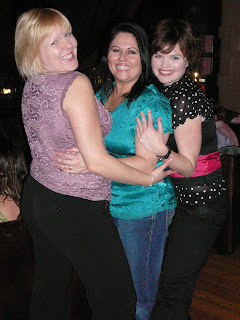 New Year's Eve went off without a hitch - well, for us anyway. Hundreds of thousands of other U.K. residents had the kybosh put on their plans with massive storms and pounding winds cancelling public celebrations in Glasgow, Edinburgh, Liverpool, Newcastle and Belfast.


But we were instead happily ensconced in St Andrews In the Square, an old Glasgow church done up for a festive ceilidh. We did have a time getting there - the rain and wind were so strong it took all my strength (and balance, in 3-inch stilettos) to propel myself forward. Once there, though, we had a lovely time - chatting with Debbie and Eoghann's friends (including the ever-so-fabulous Julie who you can see there in the photo with Deb and I), dancing away to the 'Gay Gordon' and 'Strip the Willow', and munching down on haggis and clapshot.

I must however briefly mention the disturbing effect the haggis had on me. Not twenty minutes after I'd finished eating I began feeling terribly ill. The nausea became so strong I was in the end compelled to rush downstairs to the ladies' room and - as Debbie so delicately puts it - 'upchuck my guts'. I certainly hadn't expected to see the haggis again so quickly. Within a few minutes however, I felt much much better. The ironic thing is that it was poor Greg who was initially feeling under-the-weather on New Year's Eve, having contracted some sort of 'Say Goodbye to the Mother Country' bug in the preceding few days. And despite the fact I drank nothing stronger than a Coca-Cola all night, I was the one who threw up. Further proof life has a sense of humour.

We all hugged and kissed and sang Auld Lang Syne at midnight; and after a final round of drinks headed back to Wes' fabulous tenement flat for more drinks, nibblies, music and chat. Greg, Debbie, Eoghann and myself eventually stumbled home and into bed sometime before 4am I think. But it was nae bother; we spent the Monday doing absolutely sweet bugger-all.

Today we've been packing and preparing for our sad farewell to Scotland, and Europe in general really. That's right; we're off home - via Dubai for a couple of days to break up the journey. Hopefully I'll be able to post from there - I'd love to give my impressions of the place. I have had such a wonderful time with Debbie and Eoghann though - it's really quite horrible to leave. Once I get my thoughts together, I will write a proper post to thank everybody along the way who's made this adventure so fun and fulfilling. But for now it's cheers to the Scottish crew and remember: If it's not Scottish, it's crap!

I hope everyone who reads this here blog (and I guess everyone who doesn't as well) had a very happy New Year celebration. I really do hope 2007 brings good health, good vibes and good friends to all. My New Year's resolution at this stage is pretty much just 'Get a haircut and get a real job', so we'll see how that pans out!
Posted by Girl Clumsy at 10:30 AM