That's right people. 2007 is going to be my year, and you know why? Because it's got 007 in it, that's why. Expect every party or gathering I hold this coming year to include something James Bond-ian about it.


Anyway, Happy New Year to all, especially the Australians, who - being so far ahead of the rest of the world - have already celebrated the turning of midnight. It's about 4:30pm Scotland time as I write this, and we're at Debbie and Eoghann's place, snacking, watching TV, and starting to think about maybe getting ready for tonight's 'cailedh', a traditional Highland Fling we're all off to.


This afternoon we all trekked off to 'Xscape', a big adventure park at Braehead on the outskirts of Glasgow. For £30 each, Eoghann and I went skiing (well, he actually went snowboarding 'cause he's cool) on their indoor ski slope. It was much fun, but I do admit to being a tad bored after a while. The slope was nice, but only took my about 30 seconds to speed down (24 was my P.B.). Next they need to build an indoor black run, yeah!


The past few days all up have been very relaxing. I've been wandering the streets of Glasgow's main shopping district looking for post-Christmas sale bargains, but I haven't actually bought as much as I planned/wanted to. I guess my subconscious is nagging at me - 'You've got to pay bills once you get home!'. Still, it's been nice to just be 'at home', so nice in fact that yesterday on the bus I actually had a moment of 'But I don't wanna go back to Australia!'. The reality of the end of our big adventure being almost here just hit me. I really don't know what I'll do once I get back - it's lucky then that I have the twin concerns of finding a job and kitting out my flat to occupy me! Once that's sorted, it'll be time to start planning the next trip, which may just happen around the same time as when NASA sends people to Mars. ;)

Ah, well. Time to go off and start the grooming process. For anyone who's interested, here's a shot of Greg and I getting ready: 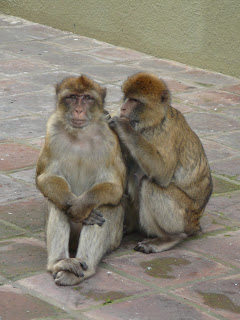 Amazing how much we resemble a pair of Barbary Macaque apes from Gibraltar, isn't it?!?!
Posted by Girl Clumsy at 2:26 AM