To market, to market

Over the years, I've assembled a fair bit of crap. Being in an apartment, I'm not really well situated for a garage sale, so yesterday I braved the early morning and headed out to Chandler to run my very own flea market stall!

The Chandler markets run every Sunday from 6am to 1pm. I had found it listed on the web, and also had it recommended to me by my aunt Helena (who we'll meet again later). I had been thinking about doing it all last week, and on Saturday I made the decision and rang up to book a space. It cost $25 to book - which may seem like a lot, but I figured for 7 hours of entertainment and the chance of making some fast cash it was a bargain. As it turned out, I made that back within minutes of reaching my spot. 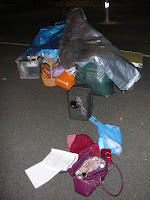 This is the scene on arrival - I had found my spot (228, to be precise), backed the car in, unloaded, then driven it out to the parking lot. At this point, people (other store owners, in fact) had already started to descend, many with torches, pouring over the stuff I had quickly covered with a tarpaulin. I sell a box of Greg's miniatures scenery and a small case to one lady for $30 - and although I'm sure they would have been promptly put on sale at another stall for twice the price - I didn't mind, as it covered my entrance fee.

Luckily I had borrowed a fold-out table and two tarps from the aforementioned aunt Helena (who had decided she would join me a bit later to flog a few things of her own), otherwise everything would have been on the bitumen. I started setting up a very basic, and in fact rather dodgy display. 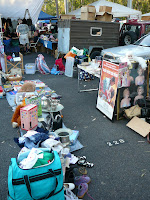 Neat, huh? The car at the right of the pic belonged to Val, my tiny stall neighbour, who was making a return to the market after 18 months of Sunday sleep-ins. The trailer up the back belonged to the stall guy behind me, who was selling wine. I think. Something in a wine bottle at any rate. Helena turned up around 6am, and added her stuff to the pile.

I'd heard this many times before but I can now attest to the truth that markets do their best business in the wee hours. I most definitely sold the lions' share of my crap between 5:30am and 8:30am.

This is what the stall looked like by about 10am: 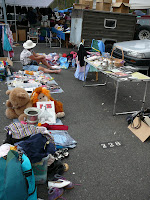 You can see Helena carefully avoiding the lens in the background. ;)

As you can see, the two framed prints are the most noticeable missing items; sold for $15 each to two different people. Nice. By this time I'd also flogged a whole lot of books, although sadly not my nice Hollywood Portraits series (they would prove impossible to sell). I'd also sold my brother's stereo, which he'd passed to me to sell, as well as a petrol-powered remote-controlled car, which went about an hour after this. All up I made my brother $295 - and yes, I did take a handlers' fee!

By 11:30am, the clouds were looking ominous (although being without cover the blockage of the hot sun was most welcome), and the crowd had really dropped off. I did sell a few more things over the next hour, but it was more sporadic, and I began the slow process of packing up. Here's my cousin Tiffany (Helena's eldest daughter, who'd been dropped down only to find herself sent on hot chip-buying errands by her hungry cousin), amidst the half-packed up site: 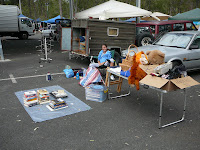 You can see the poor teddy bear and stuffed monkey, which sadly failed to get a nibble, let alone a bite. I also thought my big box of handbags would be empty by market end; but that's the thing about markets, you can never tell what people want. Things I thought would never sell went out for good prices, and items I thought would fly out (like my Kath and Kim still-in-packet fridge magnets) sat gathering dust and dirty fingerprints.

It was all over red rover well before 1pm, but we stayed anyway, mostly hoping someone might come along and buy some things for cheap, to save us having to cart them back to the car. No luck there, so we packed up - along with everyone else. I thanked Helena and Tiffany for their time and effort, and vowed to return to flog off the crap I still had left over - as well as boxes more of the stuff still in storage at my Mum and Dad's place. 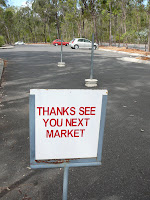 (And you can even see the mighty Hummer in the background.)