What an awfully big Thursday that was.

You may have heard of the Western Corridor recycled water pipeline - one of the big "water grid" projects that will apparently "drought-proof" South-East Queensland. Well, on Thursday our illustrious leaders, Peter Beattie and Anna Bligh, headed out to Esk to have a look at at some pipe-laying work.

They (as well as a few TV and print journos) got to go by chopper. I got to to take the news truck for a nice drive in the country. One-and-a-half hours after leaving Brisbane, I arrived at the construction site, just outside of Esk. It's been ages since I've been up in that part of the world, and I'm glad I had the foresight to pop my camera in my equipment bag when I left home. 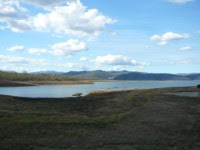 Behold! The once mighty Wivenhoe Dam. This isn't even the worst, cracked up bit of it. This is on the southern end, near a bunch of spillways. Still, as I drove past a picnic ground I remember visiting as a kid, I couldn't help but marvel at the distinct lack of dam-y-ness about this dam. It was more like a rather large pond. 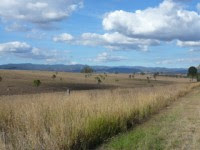 It sure is dry country up there. 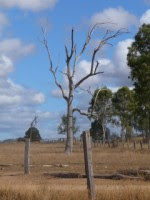 I've always found petrified trees intriguingly spooky. Even in bright sunlight, there's something goosebumpy about them. As you drive through the country, you often come across fields full of them, like naked sentries lifting their arms to the sky in supplication, as if rain could miraculously bring them back to life, as well as the dry ground around them.

I got back to the office around 3pm, and worked for a few more hours. I found a media release advising of a Labor party fundraiser that night at the Convention Centre, and in a move designed to make me feel like a bit more of a political reporter rather than actually accomplish anything of journalistic value, I decided to go.

After a trip home to change out of my dusty Esk-visit clothes and grab a bite to eat, I got Greg to drop me off at the Convention Centre. 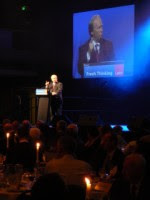 Behold! Our Most Illuminated Leader, resident funnyman and proud dog-owner, Peter Beattie (Despite all the things he is, P.B. is not God. He keeps telling us this whenever the drought is mentioned. Apparently we would know if Pete was God, because he'd make it rain. So stop asking, will you?). 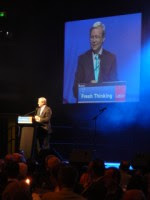 Despite a minor war of words breaking out between Kev and Premier Pete earlier that day about Beattie's plans to reform and amalgamate local councils, it was all love and goodwill by dinnertime. I had thought there might be some fireworks, or at least a major policy initiative, or some resolution on the ongoing "What do we do with AWAs?" saga... but no, it was just an ALP love-in.

So that was my Thursday. I got to sleep, like I so often have this week, around 1am. Friday has been also rather exhausting, although I did get my car serviced, a long-overdue task I can now tick off my ever-lengthening checklist. Now what was that thing I needed? Oh yeah...sleep...
Posted by Girl Clumsy at 11:47 PM