I like to do a bit of blog-trawling on the ye olde internet, and today I came across this quite remarkable photo: 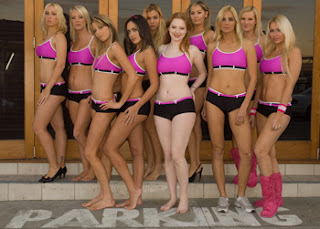 This group of gals is involved in, of all things, a Pillow-Fighting League here in Brisbane. Now - leaving aside the politics of whether or not a Pillow Fighting League is good idea - tell me, what's your FIRST reaction on seeing this photo?

Mine was: "Wow, that girl in front is so pale!"

My immediate second thought? "Hang on, why are all the other girls so ORANGE? And, apart from that brunette, why do they look all look the same?"

The fake tanning craze is reaching epidemic proportions in this country. My partner's sister - an Australian now residing in Scotland - was disappointed while visiting recently to see that Aussie girls appear to be following the lead of their U.K. counterparts, and dousing themselves liberally in whatever California/ Caribbean/Spanish/tropical "glow" they can get their hands on.

And what's worse, the "barbequed chicken" look is becoming the norm. A tan is supposed to be evocative of good health, but that goes back to the mid-20th century idea that only wealthy people could afford holidays in the sun. In these times of economic prosperity, most of us can afford holidays, and even if we can't - we live in Australia, for goodness' sake. Ten minutes outside is all you need to cop enough Vitamin D to see you through to Christmas. Nobody wants to tan naturally anymore, and that's fair enough, considering the very real risk of skin cancer. But nobody wants to wear their natural white. So we've turned instead to this sham trickery. We're walking into the salons and beauty bars to achieve that "just walked off the beach" look.

Now I'm definitely speaking from a biased point of view here. I am, sadly, blessed with doughy, pasty white skin. I once tried putting fake tan on my legs. Admittedly, this was way back in 1996, and the technology has probably advanced a lot. However, back then, my legs went orange. It was particularly bad timing on my part, as I had phys-ed that day, and got to display my carrot-stick pegs to not only my class, but the entire school, as a fire drill went off in the middle of the lesson, and I got to spend well over an hour parading around the meeting point in shorts. The experience left a somewhat bitter taste in my mouth, and I am yet to be tempted back to the world of fake tanning.

But from what I can discover from others who've had it done, it's messy, sticky and smelly. Whether you're spray tanning or using do-it-yourself lotions, the downside to your bronze beauty appears to be an undesirable odour, unfortunate sheet-and-towel staining, and, as the tan wears off, flaky white spots on your skin and orange bits all over your clothes. Mmmm, sounds attractive.

Yet women are putting themselves through all of this to achieve yet another now-standard measure of' "attractiveness". If you look at the photo above again, you'll see most have also bleached their hair blonde to match. I wonder if their breasts are as fake as their hair and skin colour? The sad reality is that it's only the inclusion of the Pale Girl in front that makes us realise how hardwired we have become to believing that this "porno" look is realistic and natural. This is what "hot" chicks look like now, and yes, while I realise there are probably non-Zoo-magazine-reading men out there who prefer something different, I worry we're all going to keep lathering ourselves up with this stuff until we're all clones of Pamela Andersen or Jenna Jameson.

The whole thing is ironic. When you travel to Asian, African or Middle Eastern countries, you will find all sorts of cosmetic products and procedures available to make your skin more "white". I personally had requests while in Beijing to be photographed because of my pale skin colour (although my 178cm and size 14 frame may have also been a factor). Everyone else in the world is trying to become more "white", because our idealised Western beauty has made it desirable. Yet we in the West are trying to go the other way! We're trying to be darker, but it's not working. We're ending up as mere clones of one particular form of ideal beauty - a bunch of Clockwork Oranges.

But I retain some hope. The fact that the photographer has chosen to put the Pale Girl in front, rather than sidelining her or trying to hide her behind one of the others, signifies that at the very least he appreciates her individuality. We just need more Pale Girls included amongst the Clockwork Oranges, and then we might start to rewire our grey matter and remember than orange is a fruit, not a skin colour.

Many thanks to young Laurel, from whom I stole this photo. I wish you all the best in the Pillow Fighting League - and hope you thwack those girls so hard, their tans flake off.
Posted by Girl Clumsy at 11:50 PM