The Joy of Wii

Just over a week ago, Chez Clumsy took delivery of a beautiful shiny new Nintendo Wii. It's a combined birthday present for both my partner and I, as the anniversaries fall within 20 days of each other.

Because of my writing challenge, I haven't spent as much time as I'd like mucking about with this brilliant piece of technology. And it is brilliant, because with its simple yet addictive games and motion-sensitive remote, it's the first console that's held my attention since the Nintendo Entertainment System.

Ah, those good old days of left-to-right view only video games. I tell you, the world of gaming peaked for me at Super Mario Brothers, and it has never quite reached those dizzy heights again. The main reason is because video games - with all their jumping and spinning and shooting and confusion - give me motion sickness. I can't stand to look at them for more than a few seconds. There's just too many options. Super Mario Bros was great - there were only so many actions you could perform. You get the mushroom, you grow bigger. You get the flower, you get fireball power. You jump up and down to hit and break blocks and collect coins. Every few levels you beat a big baddy. Then you do the whole thing all over again, with slightly different coloured blocks. Sheer genius.

I played so much Mario as a kid, I can still play the tinny theme music perfectly in my head. And when, joy upon joys, Greg downloaded old-school Super Mario Bros into our Wii system (courtesy of the wireless internet hook-up - ain't this newfangled technology grand?), I found myself immediately hitting the same blocks for secret coins, moving Mario in exactly the right way to catch the mushroom and kill the turtle, venturing down exactly the right pipe to find a secret coin depository, and making the accompanying "boing" noises in my head.

It's amazing how things stick with you. But the Wii is not just about re-living past glory days of gaming, it's about embracing a new style of play. It's been an absolute hit in Chez Clumsy - easily winning over Greg and our housemate Mark, both dedicated PC gamers (they're playing a game involving plunger-shooting bunnies even as I write), and entrancing visitors.

But I put it to the ultimate test today by bringing in some actual children: my cousins Tiffany and Amber. At 11 and 8, they're around the same age my brother and I were when we began playing Nintendo, and they've never owned a console. The most video gaming they've done is a few trips to an Intensity game parlour, courtesy of my Dad. I wanted to see how a couple of young girls would react and interact with this Brave New Console.

I'm pleased to say that upon arriving to pick up the girls this evening, my aunt was immediately beseiged with cries of "Can we get a Wii, puh-lease, Mum?" Negotiations to earn half the purchase price themselves soon followed. Schemes were being dreamt of, even as the tennis, bowling and baseball matches continued. Even my aunt got in on the act, taking on Tiffany in a boxing match. All three of them loved the process of creating "Mii"s - the little bubble-bodied avatars players create to represent themselves in the games. They even created one for our collective grandmother, and we were all howling with laughter as they tried on different hairstyles, trying to achieve just the right level of boofiness, and adjusted the size of the glasses and wrinkles.

Interestingly, Tiffany chose to make her Mii dark-skinned, even though she's no more than olive. Mind you, Amber chose to give hers a moustache and a beard, which perhaps indicates they still have their imagination intact, as opposed to all us adults, who try as vainly as possible to make our Miis look like a true-but-cuter representation of ourselves.

The novelty of the remote design was not lost on my aunt, who always though video gaming was a passive, sit-in-front-of-the-screen-thumbing-controls activity. Here the girls were getting physically into their games: Amber running around the living room as if it was a real tennis court, trying to make her return volleys; Tiffany lining up on home base, getting ready to pound the baseball as if she were Barry Bonds. Their physical commitment demanded mental focus - while continually trying new games, the girls stuck with the activity for hours without a break.

I am determined now to spend a bit more time on the Wii, if only because it's good for some physical exercise. I'm already far behind Greg and Mark, who are on university holidays and able to devote several hours a day to improving their "Wii fitness" and remote technique. But I don't need to rush it, the Wii will be around for some time (barring an errant remote flying out of hand and smashing the control box), and I want to incorporate at least a few hours a week to childlike play.

Perhaps one day, I might even finish Super Mario Brothers. 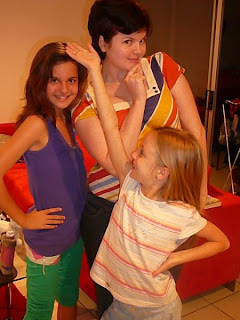 Yours truly, flanked by Tiffany with Amber posing in front. Aren't we a fine bunch of cousins?
Posted by Girl Clumsy at 10:50 PM