I took my as-yet-still-unnamed lap top with me to work today, as I thought it might come in handy covering the ALP official campaign launch, which I knew I would be rostered on to cover. I'd been told the media room had WiFi access, and I was dead keen to try out my remote connection and new audio editing software.

However, it turned out that the network's Canberra bureau chief Alison Carabine had stuck around after the big Coalition love-in on Monday, and would be doing the mainstream coverage inside. My role would be to file a "colour" story - ie, to stand outside with the protesters and record their crazy chants as the federal and state Labor bigwigs (not to mention all of those scary union thugs we keep hearing about) arrived. Standing outside the Lyric Theatre with mic, recorder, cables, phone, notebook and pen in hand wasn't exactly conducive to high-powered portable P.C. work, so I left the laptop safely in the padded section of my kit bag.

All in all, the protest was a bit disappointing. The most vocal were a bunch of Young Nationals, led by one of the Queensland senate candidates, who chanted an amusing ditty about the danger of having across the board Labor governments. Their bright red T-shirts were certainly eye-catching, but were unfortunately the exact same shade as the shirts being worn by all the Young Labor kids working as ushers, causing a few smirks among some of the journos. At least they still had their perky green-and-yellow Nationals caps, which matched the colours of their funky VW van. Because the Young Nationals are Hip and Cool, don't you know.

They only chanted whenever somebody Important arrived, and even then about the biggest it got was Peter Garrett, who was confronted with a banner of his own face beside his now-infamous "joke" to broadcaster Steve Price: "Once we get in, we'll change it all". I sometimes wonder what happens to these banners post-election. I mean, they can hardly re-use that, can they? A banner reading "Labor sux, Libs rule, dude!" will always work, but gosh, surely there's a couple of hundred bucks that could've bought some textbooks for school kiddies or something.

Premier Anna Bligh apparently slipped in the back way, and all the major True Believers were already inside (Rudd apparently rehearsing some speech changes that caused a half hour delay in proceedings). Outside the only other group presence was the Disability Alliance, who had also been at the Coalition launch two days prior. According to their spokesperson, they don't really care who gets in, as long as funding for the disabled gets boosted by at least 20 per cent. But interestingly, he did say that today's events were far more pleasant than Monday's - apparently many arriving Coalition supporters had yelled "Get a job!" and "What about the rights of business?" at they walked past the people in wheelchairs. Charming stuff, politics.

And finally, there was this guy: 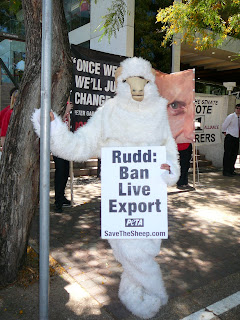 The mandatory PETA activist, demanding an end to live animal exports. This was the only shot I managed to get before my camera's battery died. I just love his/her nonchalant stance - the sheep had been running around waving the placard, but the pleasant day was obviously much warmer when experienced from inside a polyester ram suit, so rest breaks were needed.

I joked with a couple of journos about how much fun it would be if the Chaser mob rocked up with some comedy hijinks and shenanigans. But if they were around, they had the good sense to avoid the arrival area, more's the pity. We could have done with some controversy!

By 12:30pm, it was all over. The Nats packed up their banners and spare t-shirts and headed back to their funky van. The Disability Alliance members went back to their bus and cars. I last saw the sheep, still in full costume, making its way towards the Southbank foodcourt with a blonde companion. It was most likely a PETA handler, but I like to think the sheep picked up. Oh, yeah.

As for Rudd himself - I watched his speech in air-conditioned comfort back at the office, before heading out to police headquarters for a media conference about a 56-year-old woman who was scammed out of $47 000 by a Nigerian man she met on an internet dating site. But that's a whole other story....
Posted by Girl Clumsy at 11:15 PM