It's been a lovely day wandering about the city. I have just logged on and have about 20 minutes left on my $2's worth of wireless access. So here's a quick photo of me, to prove I'm here. This is in front of the clock tower of the Glenelg Town Hall: 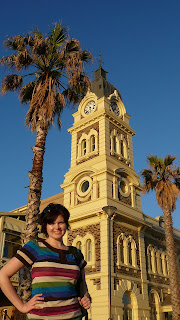 I met up with the other three backpacker publication writers - we're all doing different things in our time here so it was nice to meet up. There was Chris from Scotland, Andy from England and Nikki from New York. Also present was Suzanne from SA Tourism, who's originally from Germany. So I was the only Aussie-born. We were like a walking comedy routine - "An Englishman, an American, a Scot, a German and an Aussie walk into an organic pizza restaurant..." And typically, I was the most ungraceful at dinner, even dropping some of the salad into Chris' glass of water at one point. Luckily he was drinking Coronas, so I don't think he noticed.

This is my first trip as a so-called "Flashpacker" - a teched-up backpacker. So far it's going well - but I think I will leave my laptop here at the YHA when I go to Kangaroo Island tomorrow - they will lock it up for me and I fear accidentally dropping it into the sea or something... ;)