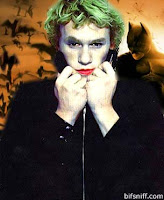 I've been very saddened to learn of the death of Heath Ledger.

There's still a lot of speculation about exactly how he died - with his family apparently rejecting initial reports of a drug overdose; and fresh claims that he was suffering from pneumonia and was found with sleeping pills near his body. Accidental death makes it all the more tragic - as Ledger really was moving into the "superstar" phase of his movie career.

However, he has left behind some marvellous films and great performances - notably, his role as Ennis in Brokeback Mountain, which I thought was just terrific. He had also finished filming on The Dark Knight, and going by the trailers, his interpretation of the Joker looks incredible.

I'll always remember the first time I saw Ledger though: in the Celtic swords-and-braids series Roar, which was filmed out in the Gold Coast hinterland around 1997. RIP Heath Ledger.
Posted by Girl Clumsy at 10:47 AM

Email ThisBlogThis!Share to TwitterShare to FacebookShare to Pinterest
Clumsy Categories: the rich and famous