Earth Hour: Worth the Energy?

This evening saw the lights go off in Brisbane as part of Earth Hour 2008.

Sadly, with street & traffic lights, transmission towers and guidance beams remaining on, the streets were not (as I'd hoped) plunged in a post-apocalyptic mire, crawling with flesh-eating zombies and flesh-scarring emos.

Still, I did my bit - turned off all the lights and appliances in Chez Clumsy - then grabbed my camera and took to the streets, in the hope of scoring some magnificent photos of a dark and sombre River City. Didn't really turn out that way, but here are the results nonetheless.

This is the view from the Normanby five-ways across the Roma Street Parklands towards North Quay. 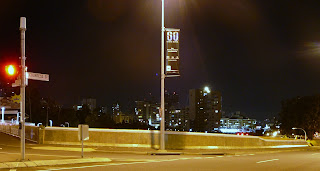 Lord Mayor Campbell Newman has been a big supporter of Earth Hour, but I couldn't help noticing his (now out-of-date) election billboard on Musgrave Road was still lit up like a Christmas tree: 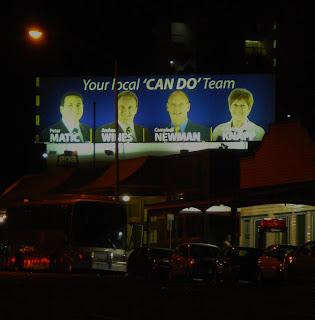 Here's a sight - Brisbane's infamous Suncorp-Metway digital clock, which makes the time available across the CBD. This is the first time it's been switched off in 30 years. 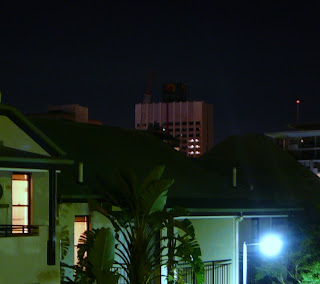 However, less than five minutes later, like a burning, dawning sun, the colossal timepiece burst into electric flame again, signalling the end of the hour of darkness with a jaunty 9:01. The camera can't even make out the digits, such was its brightness: 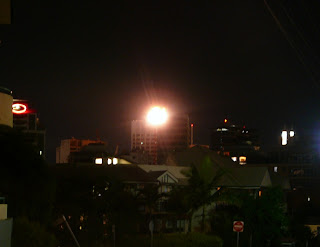 I wasn't in a good position to see major structures like the Story Bridge, Kangaroo Point cliffs, City Hall, XXXX Brewery and State Library go dark, so I can't really judge how effective the campaign was. However, the streets of Spring Hill seemed much the same as usual, if not a little quiet for a Saturday night. As I began my walk, I heard a group of residents in an apartment yelling to their neighbours to "turn them off, it's Earth Hour!", but there was little other evidence to show a mass dimming of the lights.

Anybody else get out and about? Was there much participation in suburbs further out from the city? And was Earth Hour worth the energy?
Posted by Girl Clumsy at 10:45 PM