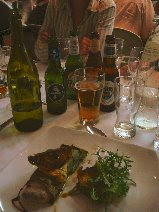 It's been an exhausting but exciting couple of days for your humble correspondent - I've been attending Wired for Work, the 11th Annual Freelance Journalists Convention. Run by the MEAA, and held at the slick new State Library of Queensland, it was two days of networking, schmoozing and listening to stories and advice from others in the industry.

The conference was really the first "career development" shindig I've ever attended, and I'm looking forward to going to more. My favourite sessions included "Interviewing: Tricks of the Trade", which featured political reporter Cathy Border from Ten News, and Anna Bronowski, the filmmaker behind "Forbidden Lie$", the marvellous documentary on Norma Khouri. That session contained some priceless stories and insights about the art of asking the right questions and dealing with the (often wrong) answers. I also enjoyed the Sunday morning panel on the future of the media. Turns out joining Facebook was a step in the right direction, as opposed to a needy, self-indulgent waste of time. The panelists, which included Crikey.com.au contributor Margaret Simons, were all dead enthusiastic about social networking as a future source of news for most people. The terms "Search Engine Optimisation" and "User Generated Content" were also bandied about with alarming frequency, which was just another thud of a reminder about how much I still have to learn/teach myself about the internet. Good thing I've started with that domain name.

Saturday night was the convention dinner, held at Decks Restaurant at Southbank. It was lovely to walk in and be greeted by a wave from one John Birmingham, who was there to give the keynote speech - despite suffering from a nasty head cold. We wound up sitting at the same table, with a trio of stylish UQ journalism students. I tell you, I wish I'd been that glamourous at university. They had proper haircuts and everything, as opposed to the mass of badly-dyed red frizz that I sported during my UQ days.

The dinner was sponsored by Lion Nathan, and the company's chief brewer was on hand to give expert opinion about the beers that were on offer throughout our three courses. Now I'm not a drinker, but I was encouraged by Birmo to sample a few of the brews. I probably had about one standard drink all up, but that's a lot for me. At one point in the evening I turned to John and asked if it was normal for one's head to feel a little cloudy after consuming the amber fluid. 'Yeah, that's beer," was his reply. So, hoorah! Girlclumsy gets a beer buzz. New experiences abound.

You can see in the picture some of the beers that we taste-tested. This was taken before desert, when the cherry-flavoured Belgian beer and supposedly chocolate-y James Squire Porter were wheeled out. The one I enjoyed most was probably the Hahn Low-Carb Super Dry. It had a more wine-y texture, was quite smooth, without a lot of the bitterness that puts me off beer. I'm sure low-carb beers are sniggered at amongst most afficionados, but I figured I can probably get away with drinking a big girly beer.

John's speech was very entertaining - some of the anecdotes about trying to get money out of various publications were hilarious. Apparently a certain rock magazine once sold their review CD collection to pay for a photographer. Here was I thinking magazines are professionally-run operations! He was also very gracious putting up with my questions about his writing, books and even that film throughout the evening.

Sunday afternoon saw the speed-pitching session, where we had five minutes with three different editors, in order to throw out the ideas line and hopefully get a bite on the end. I don't yet know if I've managed to reel in a good catch (have I tortured this analogy enough yet?), but I'm quietly confident, and just taking it one game at a time (fishing AND sport! She's got all analogy bases covered!). At the very least I managed to pass out a fair few of my shiny business cards, so I may have a new viewer or two to the old 'blog - sorry, online digital new media social networking bookmarking experience centre.
Posted by Girl Clumsy at 12:27 AM