Today I discovered the best job in the world: acting in a movie! 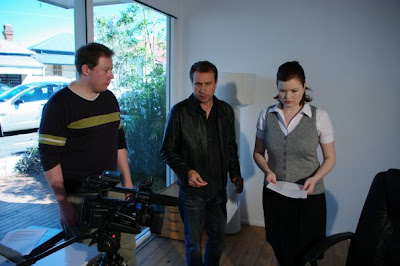 My own silly videos aside, the most film I've done is a NIDA short course, (a fair waste of $450) and my buddy Oisin's 2001 epic horror The Sheet! (The Sexy Detective guys still won't answer my calls - yes, I'm looking at you Mike Skillz)

But that all changed today. You see, a couple of weeks ago, through a combination of luck and Facebook, I was asked to be in a short film, being produced for this year's Courier-Mail Queensland Short Film Festival. I was very excited, nay, thrilled - and today's shoot surpassed all my expectations.

The film is called Well-Heeled, and it's a charming little romantic comedy by Brisbane-based writer/director Robert Braiden. I was cast as Oona, the lead character. But in a stroke of what I can only describe as sheer genius, Robert wrote the script without any dialogue. With the pressure of remembering lines removed, I was afforded a relaxed and delightful entry into the world of short film-making.

It was a small crew - Robert directing, Stewart behind the lens, with Chris on sound and taking the stills - and three other cast members. Everyone was very friendly and easy to work with, and the filming was efficient and painless. Sure, there were a few times I struggled to repeat my moves and actions in exactly the same way for second, third, fourth takes, and I did eat far more musk sticks than the script called for, but apart from that, it was just fun.

I believe the film's got a great shot at winning the competition - so I hope you'll all keep an eye out for it. Hopefully I'll be able to post it, or a link to it, up here soon.

But for now, I'm retiring to my trailer. See you on the back lot, darlings.