Greetings from Brunei Darussalam - the "Abode of Peace", approximately 440km north of the equator.

Our flight out of Brisbane was smooth and uneventful - even if the Royal Brunei plane lacked back-of-seat personal entertainment systems (What is this, 2002?). 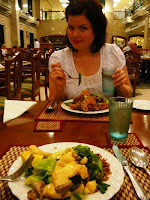 The only problem came at Bandar Seri Bagawan airport, where a miscommunication about re-arranged flights and accommodation saw a group of disembarking passengers (including your intrepid adventurers) sidelined near an immigration booth waiting for our passports to be checked over by some confused-looking ground staff.

You can tell that the Wah and I are reasonably seasoned travellers, because rather than get worried and frustrated by this turn of events, we did a little dance and invented "The Clusterf**k Song", in honour of the post-flight mess.

Eventually we got to our palatial and luxurious accommodation - the Orchid Garden Hotel. My oh my. For a couple of backpackers we feel incredibly spoiled. Our first night is on the airline, and we're in a big room with two beds, a bathroom with a hose for use "post-toilette" and a flat-screen TV with BBC World. We somehow scored a massive free buffet dinner as well, as well as a fruit punch welcoming drink (no alcohol in this strictly dry Islamic nation). 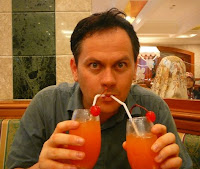 A short walk outside after dinner was enough to remind us of just how humid this part of the world is at the height of summer. There's not much about near our hotel, so we're heading to bed for a good night's sleep ahead of a water village tour tomorrow. We also intend to see some probiscus monkeys, if they'll deign to show us their rather flappy faces.
Posted by Girl Clumsy at 12:03 AM