This, my friends, is one metre of cocktail. Sex on the Beach, to be the precise.

We spent our final night of the cruise in the old town of Dubrovnik, a UNESCO World Heritage site. We walked the extraordinary city walls (over 2 kilometres), sweating in the sun and taking in the bright orange tiled rooftops - a reminder of the rebuilding and restoration of the city, which suffered under siege from the Serbian navy during the Balkans War in the early 1990s.

In the evening, after dinner and a stroll through the narrow, marble-paved streets, we ended up at "Le Fresh", a cocktail bar that also served wraps and provided free wi-fi access. With my laptop on charge onboard the "Tarin", I instead joined my shipfellows for a hearty knees-up involving metric measurements of mixed spirits. This particularly bright orange tube was quickly followed by one of the house cocktail, which was a fairly unnatural shade of aqua. I really didn't have very much at all (as you know I'm not a drinker), and I put the slight swaying I experienced down to the rocking one week on a boat had left me with. Eoghann, the Wah's Scottish brother-in-law, said the cocktail was mostly fruit juice - and if you can't trust a Scotsman on the subject of alcohol, who can you trust? 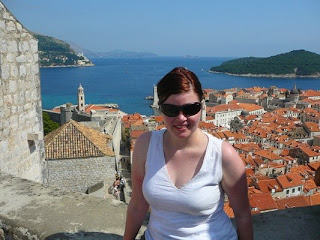 A shot of me in Dubrovnik, overlooking part of the Old Town, the harbour, and a smidge of the grey stone walls. As you walk around Dubrovnik, you can still see bullet and mortar dents in the walls of some buildings. High on the mountain above the town (beyond which lies Bosnia) stands a solitary large blue pylon, still upright despite the Montenegrin navy bombing the cable car line that once ran to it. 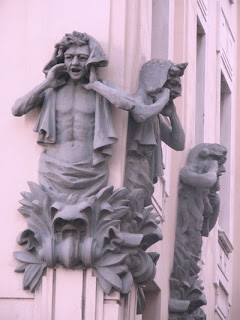 These statues decorate a charming building in Diocletian's Palace in Split, to which we returned by bus on Saturday after departing the "Tarin" (so very sad, such a marvellous craft she was!). I theorised it must have once been a theatre reknowned for terrible operas or appalling plays; how else would you explain the grimace of agony?
Posted by Girl Clumsy at 7:00 PM