There are many ways one can enjoy Riverfire, Brisbane's premier "blow up the sky" event. One could mix it with the half a million others crowded around Southbank, the Kangaroo Point cliffs, and other vantage spots. One could drive up to Mt Coot-tha, or if friends or finances permit, head to a luxury city high-rise to watch the fireworks spectacular.

But for me, nothing beats sitting in your Toyota Corolla for just under two hours, and getting a neck cramp from leaning out the window to get a glimpse of a few catherine wheels and roman candles.

Yeah, I got stuck in Riverfire traffic. But guess what? Thanks to the wonders of my new Samsung F400, you get to share that experience with me.

After missing my window of opportunity to cross the Story Bridge before it was closed off, I was re-routed onto Ipswich Road, heading south.

I got stuck at the intersection with Vulture Street for about 20 minutes. Most of my time was spent getting angry at the driver of the car behind me (thanks for beeping, dude, but you know, couldn't really go anywhere because of those red lights and stuff).

The situation wasn't helped by to Triple M's pre-show radio coverage, particularly when they peeled out 'Imagine' by John Lennon - because it's, like, you know, inspirational. I mean, I know I'm probably Robinson Crusoe here, but there's something about that song that just gives me the right royal irates. Probably because it gets wheeled out anytime somebody wants to feel righteous about something.

By this time I'd been in traffic for a good 45 minutes, and was moving about as fast as a narcoleptic snail on Valium. But as the John Lennon song mercifully trailed off, to be replaced by the sound of an RAAF pilot "radio-ing" in his flight path, I knew my mood would soon be lifted in the best possible way - by 15,000 litres of burning jet fuel. 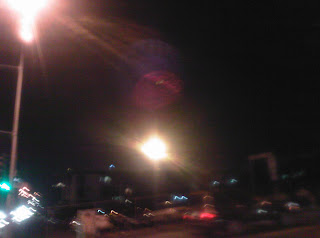 If I've learned nothing else in this life, it's that one can't possibly feel anything else but a sense of excitement and chest-pounding, testosterone-soaked pride at seeing an F1-11 switch on the afterburners, then let fly with the petrol cap. Ohh, yeah.

I was looking south as the jet came in low towards the city, its green wing lights glinting quietly before the flame came on, and the roar of the engines caught up.

"Woooo-hoooo!" I yelled out the open car window, slamming my palm against the door. It's moments like these I come over all Robert Duvall from Apocalypse Now, and wish it would just go the whole hog and drop some bombs. 'Cause blowing stuff up is cool.

I proceeded to watch what I could of the pink, green and blue sparklies as the cracked and sprinkled themselves over the river. Of course, I was actually driving, so I did the responsible thing - and switched on the camcorder on my mobile (er- language warning here).

It's true - I was actually trying to get to a hen's night in New Farm. The fact that I'm at home blogging this should give you some indication of how successful I was in this mission. I'm sorry Bec - I owe you a drink.

Eventually I turned onto Stanley Street at Woolloongabba and wound up with a great view towards the river, where I knew a second F1-11 would soon be heading, fuel tank ready to explode for the climactic conclusion. I grabbed my phone, clicked on camera, but - OH NO!

I had the perfect position for a crappy mobile video of the dump and burn, but 25 minutes of random self-photography had used up all the power. It'd only been on one bar anyway. Still, it meant I got to fully absorb the heat from the jet's fiery tail, singing at the top of my voice along with the soundtrack (Foo Fighters 'Pretender') as it shot overhead and into the night.

Dump and burns are So. Awesome.

With the whole thing over, it took me another 15 minutes to drive home, tired and sore from tension and excessive neck craning. But I did see the new Brisbane Wheel (not sure if it's been officially named yet, but I'm pushing "The Spin", in honour of our politicians) all lit up properly for the first time, and gosh-darn but it looks pretty. It will be a lovely addition to our city, methinks.