I know I'm probably the seven-billionth person to write a blog post about Amy Winehouse, but woah. She's not a well puppy, is she?

If you click through to this link, you'll be able to see more eyebrow-and-hair-raising images of the scrawny chanteuse having a "tired and emotional" night out in London. I give you the option of clicking the link because a) it is the Daily Mail online, b) you may not want to lower yourself to looking at paparazzi shots and c) you may want to keep your dinner down.

The most disturbing shots are those of Amy's ravaged face. I remember disagreeing with a friend - Disco Stu, in fact - some time back over whether the scars, scabs and sores were the result of chronic drug use. I understood Amy to have acne, and defended her by saying it was probably unfortunate skin problems, and we should try to be a bit more understanding.

Now I think I should probably eat my words, as it seems obvious there's something else going on there well above and beyond the trauma of cystic acne. Of course as we all know Disco Stu mainlines "Mother" energy drinks, so he's really not in a position to judge anyone about their addiction. 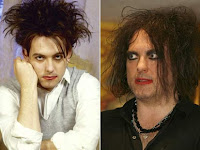 Perhaps I have to accept a certain fondness for the crackpipe on Amy's part - if only because she's persisting with that ridiculous black eye make-up. Surely a sober person would think twice about applying more kohl than Robert Smith? Mind you, there's an uncanny resemblance with the enormous backcomb as well - perhaps Amy Winehouse wants to BE Robert Smith? Or Trent Resnor, or Billy Corgan, or some other hard-rocking twat who thinks outrageous hair & make-up = hardcore?

The upside of Amy Winehouse's sad addiction (that is, for everybody else bar Amy) is that it makes for some easy laughs. I mentioned in an earlier post that I took part in a Griffith Uni Debating Society comedy showcase last week - one of the biggest responses I got was when I said the stockmarkets had collapsed "harder than Amy Winehouse at a nightclub". That really cut through to the 19-year-old law students in the audience. It's good to know despite her prodigous musical talent, she's become a punchline. Maybe a punch-drunk-line.
Posted by Girl Clumsy at 11:53 PM

Email ThisBlogThis!Share to TwitterShare to FacebookShare to Pinterest
Clumsy Categories: comedy gold, the rich and famous